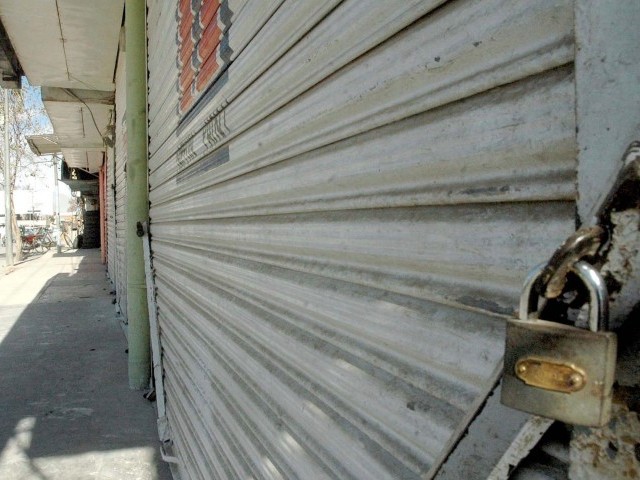 GILGIT: All entry and exit routes were sealed and markets closed on Wednesday after three people were killed and two others were injured a day earlier in a fresh wave of sectarian violence that erupted in reaction to the Naran bus attack.

“The step has been taken to overcome target killings,” Ali Sher, a senior police official told The Express Tribune.

“This is understandably a reaction to the Naran bus killings,” he said of the violence that left three people dead and two others seriously wounded in different incidents of target killings in Gilgit on Tuesday. The recent incidents came four days after 19 passengers, mostly Shias, were shot dead by terrorists at point blank range in the Mansehra district.

Authorities denied it was an undeclared curfew, however the restrictions were similar to those imposed during one. People were not allowed to come out of their homes, markets were closed and travelling on vehicles banned as police and other law enforcement agencies kept patrolling the deserted roads of the city.

On Tuesday, two traders Abdul Haleem and Mirza, were killed near Sakwar area after gunmen opened fire on them. The deceased belonged to Swat and were running a business in Gilgit.

Sher said that suspects had been arrested in connection with the killing of traders.

In the second incident, unidentified armed men opened fire on Frontier Constabulary (FC) personnel deputed outside the deputy commissioner office at Khomer, killing one Manzoor on the spot while seriously injuring another man identified as Shujaat.

On Wednesday morning, authorities made repeated announcements through loudspeakers, asking people not to open shops and remain indoors, leaving the roads deserted.

An official at the Chief Minister Secretariat said that people in need of any sort of help would be facilitated by the authorities. About the duration of the undeclared curfew, he said that it would be decided during a law and order meeting likely to be held at night.

Earlier on Friday last, two truck drivers from Khyber-Pakhtunkhwa were killed in Nagar valley and two others were injured in separate incidents.

Paris-bound woman falls asleep on plane, wakes up in Lahore