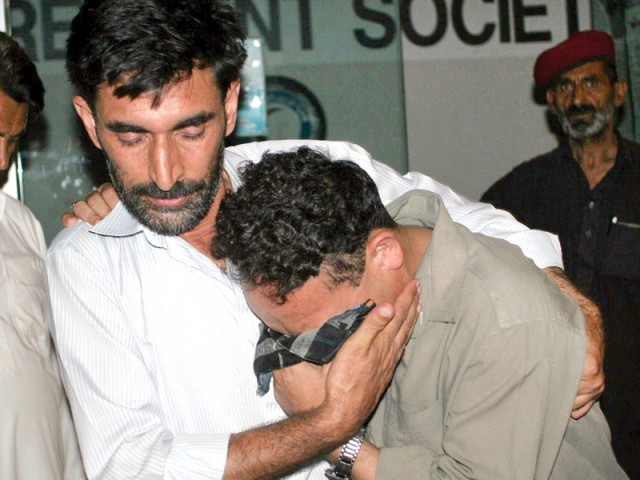 A man comforts a mourner, following the attack on a passenger van in Mansehra. PHOTO: AFP

Over a dozen gunmen forced 19 Shia passengers off four buses and shot them at point blank range in the Mansehra district on Thursday, breaking the fragile peace in the region and marking the third such incident in six months.

The ambush took place as the buses, en route to Rawalpindi from Gilgit with over 100 passengers onboard, were stopped at dawn in the Lulusar area, which lies below mountains, the director of police in Gilgit, Ali Sher said.

The passengers, over 20 of whom were Shia Muslims, made a short pit stop at a local hotel in Kaghan during Sehri before resuming their journey. However, some 22 kilometres from Naran, the buses reached a deserted area locally known as ‘Thanda Pani’ near Babusar Top, where the road had been blocked with heavy stones and wooden logs.

“No sooner than the driver applied the brakes, over a dozen armed men in military uniform appeared from the bushes and forced their entry into the buses,” a police officer quoted one of the van drivers as saying, adding that assailants appeared to be Pushto and Kohistani-speaking.

Officials said the gunmen wearing army uniforms checked the identification cards of the passengers, lined up the Shia passengers on the roadside, tied their hands and then opened fire on them. The assailants left moments later after ensuring that none of the victims were still alive.

Later on in the day, the Tehreek-e-Taliban Pakistan (TTP) Khyber Agency chapter spokesman Muhammed Afridi claimed responsibility for the grisly attack, saying the Pakistani Taliban would continue to target the Shia community in the future.

According to Kaghan police, a driver had informed them about the incident around 10am, springing senior officials into action. The injured were taken to different hospitals of Mansehra district.

“We were told that there were over 40 attackers and they came from Neelam Valley and went back on the same road they came from, on foot,” said Hazara commissioner Khalid Khan Umerzai.

“All the victims died on the spot,” the commissioner said, adding that 18 of the bodies had been identified while one was beyond recognition.

Sectarian violence in G-B has seen a dramatic rise in the past year. On February 28, gunmen in military fatigues hauled 18 Shia Muslim men off buses travelling from Rawalpindi to Gilgit in the northern district of Kohistan, shooting them dead in cold blood.

On April 3, a mob dragged nine Shia Muslims from buses and also shot them dead in the town of Chilas, about 97 km south of Gilgit.

The efforts to forge sectarian harmony in Gilgit-Baltistan (G-B) received a serious blow on Thursday after the deadly ambush of passenger vans in Khyber-Pakhtunkhwa.

“We have placed security on high alert as a precautionary measure, even though the incident hasn’t taken place inside G-B’s limits,” DIG Ali Sher told The Express Tribune.

Fear and panic gripped the region as markets were shuttered soon after the news spread.

Deputy Commissioner Astore Momin Jan told The Express Tribune that they were in the middle of collecting details. “This is really unfortunate but we expect our clergy to cooperate with the government in maintaining peace,” he said.

A high-level meeting chaired by GB Chief Minister Mehdi Shah was convened in Gilgit to discuss the security plan crafted two weeks ago after a roadside remote control device ripped through a passenger van.

“One of the decisions taken in the meeting was to suspend traffic temporarily on the Babusar road between Gilgit and Rawalpindi,” said an official who attended the meeting.

The chief minister held another separate but crucial meeting with the members of the Masjid Board to discuss the possible fallout of the incident.

Parts of Gilgit-Baltistan shut down to protest Shia killings