Concer­n about the negati­ve impact of food insecu­rity over women and girls in partic­ular has been raised.
By Sehrish Wasif
Published: August 24, 2010
Tweet Email 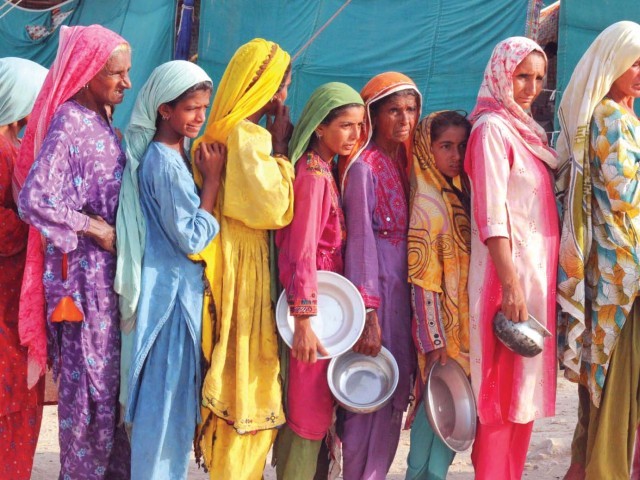 Flood-affectees stand in a queue for food on Monday. Photo: AFP

ISLAMABAD: Speakers at the ‘Impact of Food Inflation on Women and Girls’ seminar on Monday stressed the need to make relief operations more ‘women-friendly’ and expressed concern about the negative impact of food insecurity over women and girls in particular. The seminar was organised by Sustainable Development Policy Institute (SDPI) in collaboration with Women’s Organisation for Rights and Development (WORD).

Most of the speakers at the seminar termed food for women and girls a top priority during relief operations. According to statistics, 40 per cent of the population was getting less food than is nutritionally required even before the floods, while 40 per cent had reduced their daily food consumption so that their children could eat.

“The food insecurity  situation has been worsened by the floods,” said Dr Aqsa Khan said. Dr Saba Khattak urged the need for a long term comprehensive social protection strategy for women and girls.

“Women are not only facing gender inequality but also other inequalities such as of caste, geography, land access and ownership in pre-flood situations. The floods have exacerbated their miseries.”

According to the Ministry of Health, 45, 000 women will be giving birth in relief camps all over Pakistan. Participants urged the government to ensure the access of good health services and nutritious food for these women. Speaking at the occasion, Sameena Nazir said that most women lacked proper knowledge about nutrition which resulted intheir children being malnourished.

She suggested that women be educated on health issues and should be involved in the revitalisation of flood affected areas, “Women need to be trained on how to preserve and process fruits, vegetables and livestock.” The increasing crime rate was also a cause for concern for many participants who felt that proper security arrangements should be made, especially for women and girls.

Dr Abid Suleri said, “The floods have brought social challenges for women, like the increase of violence and household level tension amid difficulties of food insecurity.” Dr Sajjad cautioned that the inflation rate would double the anticipated 9.8 percent in budget 2010-11 which would add tremendous difficulties for women and girls.