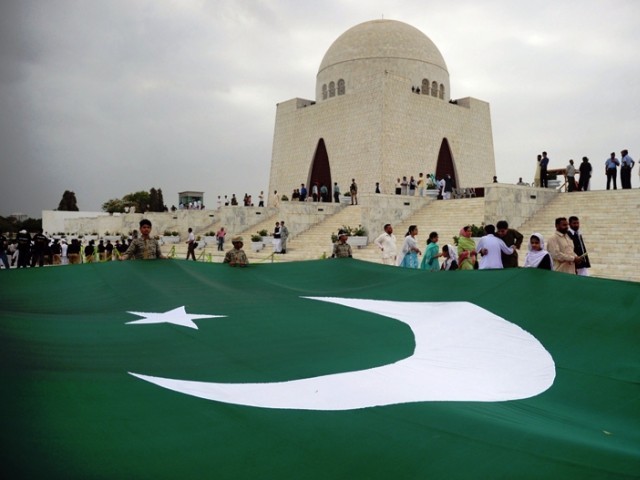 Pakistan’s Independence Day on Tuesday began with the roaring echoes of a 31-gun salute in the federal capital, while 21-gun salutes were conducted in the provincial capitals, Express News reported.

Governor Sindh Dr Ishratul Ebad and Chief Minister Sindh Qaim Ali Shah arrived at Quaid’s mosoleum along with members of the Cabinet. They laid wreaths and said fateha prayers there. The Pakistani flag was also hoisted on the occasion.

While talking to the media, the chief minister and governor of Sindh said that by standing under the shade of the mausoleum, they are reviving their commitment to the nation.

Children participating at the event sang national songs, expressing their fervour and zeal.

During his address, Sharif mentioned the efforts made by Muslims in the wake of independence in 1947. DG Rangers raised the Pakistani flag at the ceremony held at Wagah border.

Independence Day celebrations held at Police Line in Peshawar were attended by Chief Minister Khyber-Pakhtunkhwa Amir Haider Hoti, who also raised the flag at the event.

While in Quetta people celebrated Independence Day with fervor.

Speaker Balochistan Assembly Muhammad Aslam Bothani said during his address that the situation of the country and the provinces implies that Independence Day should not only be limited to celebrations.

Late to work? Sit-ups and the stick for policeman in Gujranwala