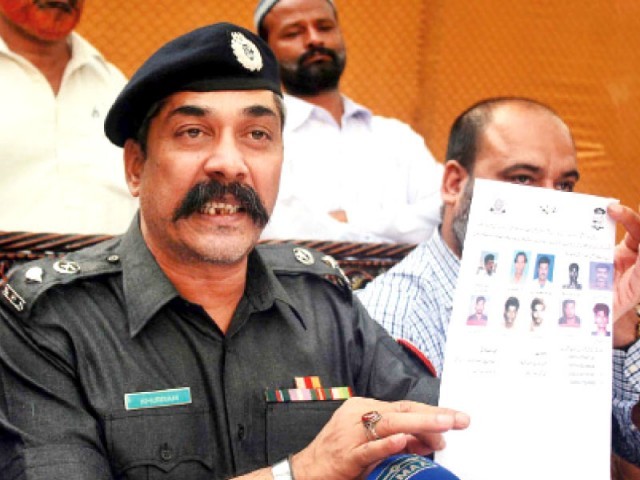 The images of 10 most-wanted extortionists said to be involved in around 90 per cent of extortion cases in the city have been released by the police.

The pictures were issued at a press conference held at the Karachi police’s Special Investigation Unit office on Saturday. The SIU chief, SP Khurram Waris, and the Anti-Extortion Cell (AEC) chief, DSP Wasif Qureshi, told the journalists about the suspects who were stated to be linked to different gangster groups.

“If they are eliminated, consider Karachi free from extortion mafia,” said SP Waris. “They have been booked in more than 100 major extortion cases.

The most notorious among the lot is Ahmed Ali Magsi, who is allegedly affiliated with the banned Peoples Amn Committee.

He has also been booked in target killing cases of over 18 workers of the Muttahida Qaumi Movement.

The officers said that the suspects have also shot dead or injured many people over their refusal to pay extortion money.

“They are difficult to catch because nobody recognises them by face as they assign their workers for criminal activities,” said the AEC chief. “The release of their photographs will help the citizens identify them and get them arrested.”

Anyone who helps the police in arresting the extortionists or provides credible information leading to their arrests will be rewarded “appropriately”. The names of the informants would be kept secret.

The city has witnessed a sharp increase in extortion cases with criminals frequently threatening traders and shopkeepers of dire consequences if the desired amounts are not paid. Recently, the extortionists have adopted another tactic to cow the business community by hurling hand grenades at shops and markets that refuse extortion. The officials also claimed to have arrested five men allegedly involved in extortion and target killing cases.

The suspects were identified as Abdul Rahman, Yousuf Lahoti, Shahzad Khaskheli, Tahir Mehmood and Mohammad Shahid.  They were arrested during an encounter on Mauripur Road and a hand grenade, four Kalashnikovs and three pistols were seized from them.

The men were booked in over 50 extortion cases, especially in old city areas, and over half a dozen target killings. About two months ago, they had killed a Rangers soldier and wounded his colleague in the Aram Bagh area, the SIU chief said.

The suspects were said to be linked to the notorious Baba Ladla and Sheraz Comrade groups.