Commun­ity, in collab­oratio­n with an NGO, organi­se fun relate­d to the nation­al day.
By Our Correspondent
Published: August 12, 2012
Tweet Email 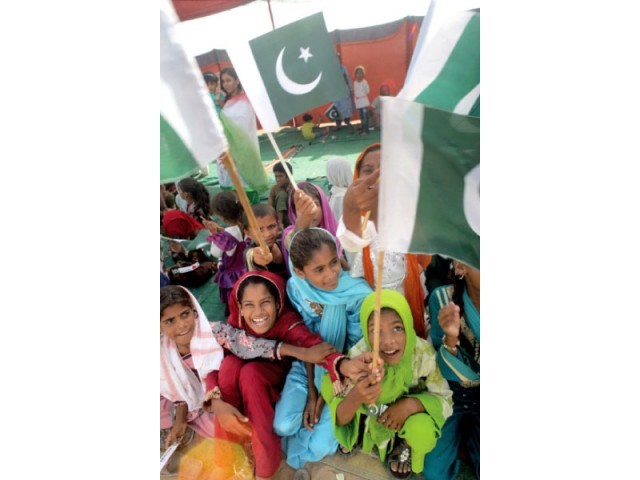 Community, in collaboration with an NGO, organise fun related to the national day.

The patriotic spirit ran high in a football ground at Abdul Rehman Goth as the children of the coastal village familiarised themselves with national songs and waved Pakistani flags.

Eight-year-old Mustafa did not know the date of Pakistan’s creation or the lines to the famous song Dil Dil Pakistan, but he knew he wanted to be a part of the celebrations. “I am so happy. I will dance to every song today. Pakistan Zindabad!” he shouted.

Families and children gathered on Saturday to celebrate the upcoming Independence Day at the event organised by people of the community and the Indus Earth Trust (IET).

Tasneem Hussain, a representative of the NGO, said that the event aimed to bring together people from the city and the urban villages.

The IET has been working on sustainable development projects for the past 10 years. “Keeping in theme with the national day, the event has been titled ‘Azadi from Dependency’. But it is also a reflection on how the village is capable of organising such events,” she said, adding that the NGO is imparting entrepreneur skills to the people in Abdul Rehman Goth.

Children, some of who were dressed for the occasion, dipped their hands in green paint and formed hand prints on a white sheet to make the national flag. “This is fun. I have never made a national flag before,” said seven-year-old Sadaf who does not go to school.

Other children watched a football match between young men of their village and students of the Indus Valley School of Art and Architecture. In fluorescent jerseys, team Goth won the game by 3-1. “Football is in their blood and they are more talented than us,” admitted a student of the school, Moiz Imran.

Rahina, from the adjoining village Sumaan Goth, said that she had only one message for her country on its birthday: “I want people to open up schools in my area. I want to study and make my country proud.”

Community leader, Abdullah Rajpar, said that the event was a good effort and should take place every year. “Independence means as much to us as to others, and this way we have expressed our happiness and love for the community,” he said.