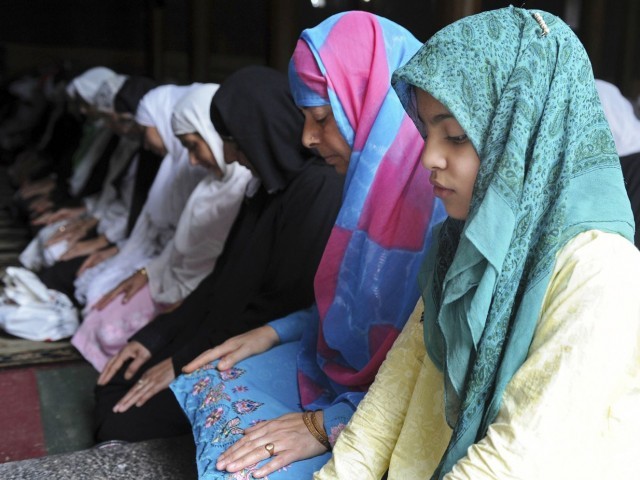 Muslims agree on the core principles of their faith, but differ widely in religiosity and religious tolerance: Poll PHOTO: AFP/FILE

WASHINGTON: The global Muslim community of 1.6 billion people agree on the core principles of their faith, but differ widely in religiosity and religious tolerance, according to a poll published Thursday.

“Muslims are unified by core beliefs and in core practices” like faith in a single God, believe in the Prophet Mohammed (PBUH) and fasting during Ramazan, but “there are differences, sometimes widely” in religious interpretation, James Bell, the principal author of the new Pew Research Centre study, told AFP.

The report, which Bell said was “unprecedented” in scope, was conducted in over 80 languages in 39 countries that account for 67% of the world’s Muslim population.

Between 85 and 100% of Muslims believe in God and revere Prophet Mohammed (PBUH), the survey said.

Eight of 10 people interviewed in sub-Saharan Africa as well as South and Southeast Asia say religion is “very important.”

But only six in 10 agreed in sample countries of the Middle East and North Africa, and only one in two agreed in former Soviet countries like Russia and some Central Asian republics.

In the Middle East and North Africa, Muslims aged 35 and over are more religious than their younger counterparts. The opposite is true of religiosity in Russia.

In 39 countries surveyed, men are more likely than women to pray at a mosque, which Bell explained “is likely to do with social culture about how women publicly observe their worship.”

Still, “in most countries surveyed… women are about as likely as men to read (or listen to readings from) the Holy Quran on a daily basis,” the report said.

Around 63% of Muslims in surveyed countries believe there is only one way to interpret Islam. Only 37% of American Muslims agreed with that statement.

In countries where Sunnis and Shias live side by side in large numbers – such as Lebanon and Iraq – believers are more likely to accept the other sect.

Conversely, in predominantly Sunni Pakistan, 41% of Muslims believe Shias are not true Muslims.

A quarter of everyone surveyed “identify themselves neither as Sunni nor Shia but as ‘just a Muslim.'”

Nine out of 10 Muslims interviewed were born into the religion.

Conversion rates are highest in former communist countries, with seven percent of all converts in Russia. Many of the converts were raised in atheism.

“When it comes to conversion … it is not playing a large role in expanding or growing the number of Muslims around the world,” said Bell.

Pew plans to publish another survey soon on Muslims’ social and political attitudes.