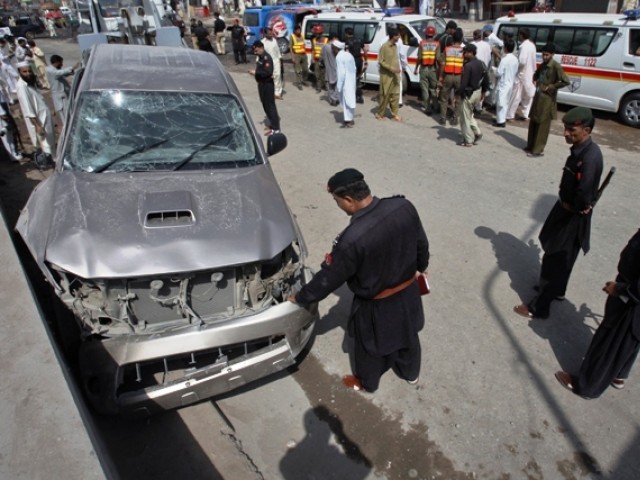 Frontier Corps officials survey a damaged vehicle after it was hit by a bomb attack on the outskirts of Peshawar, August 8, 2012. PHOTO: REUTERS

PESHAWAR: At least six people were injured when a Frontier Corps (FC) vehicle was targeted in a bomb attack in the Phase III Chowk area of Jamrud Road on Wednesday.

The vehicle was enroute to Peshawar Saddar from Phase 6 Hayatabad when it came under attack near an under-construction bridge at the chowk, injuring six people and completely destroying the vehicle.

Talking to The Express Tribune, an official of the bomb disposal squad (BDS) Hukam Khan said that around 5kg of explosives had been used in the home-made device which was detonated via a remote control.

Deputy Superintendent of Police (DSP) Fazal Wahid confirmed that there had been no loss of life and that the injured had been shifted to hospitals.