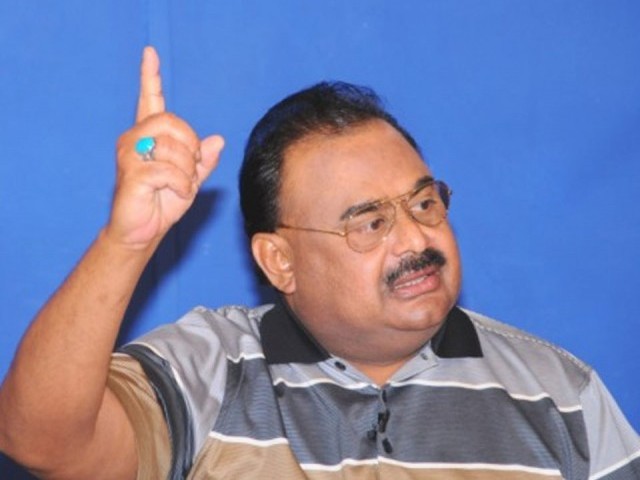 “If it is a war then we too will get fully involved in it,” Altaf declared to a wide gathering of people at the MQM’s traditional iftar party at Jinnah ground. PHOTO: FILE

It was a no-holds barred evening as Muttahida Qaumi Movement chief Altaf Hussain skewered the Sindh government for failing to protect its business people as Rehman Malik, Nisar Khuhro, Qaim Ali Shah and Ishratul Ebad sank lower and lower into their seats in silence.

“If it is a war then we too will get fully involved in it,” Altaf declared to a wide gathering of people at the MQM’s traditional iftar party at Jinnah ground in Azizabad on Monday night.

The MQM would set up a Muttahida Tahaffuz-e-Businessman Forum as traders had requested Altaf Hussain and would donate 100,000 party activists for the security of traders given how widespread extortion had become.

Altaf told the businessmen present that they should buy G-3 rifles and Kalashnikovs, and acquire licenses even if they had to pay bribes. This is not the first time Altaf has made such an appeal and indeed, he bitterly recalled the time when he had told people to sell their refrigerators and television sets to buy weapons to protect themselves in the mid-80s. “My statements were made fun of and people had sided with my opponents!” he cried.

Altaf threatened that if the problem isn’t resolved in the four days business owners would act on their own. If they were paying extortionists millions of rupees, then they might as well hire body guards as well. He said that no one had the courage to stand up to the ‘bhatta’ mafia and asked why the Supreme Court did not do anything. “Extortionists loot money from traders and then deposit them in banks in Indonesia and Dubai,” said Altaf. “The extortionists have the latest weapons while the police roam around with weapons from the British era.”

The MQM had invited politicians, journalists, industrialists and government officials to the iftar. Adviser Rehman Malik was flanked by Sindh Assembly Speaker Nisar Khuhro, Local Government Minister Agha Siraj Durrani and Adviser Sharmila Faruqi. Their unease was palpable as Altaf spoke of the government’s failure to protect its people.

The MQM chief talked at length about Balochistan and censured Rehman Malik for calling the people “separatists” and enemies of the state. “When the custodians of law kill people and mutilate their bodies, do you expect them to chant slogans in Pakistan’s favour?” he asked rhetorically.

Altaf directly addressed Malik and told him that when he was the director of the Federal Investigation Agency, MQM activists were put through the most brutal persecution. “They were rounded up in numbers and when they asked for water they were made to drink urine!”

For his part, Rehman Malik said to the gathering: “I want to remind the people of Sindh that Altaf bhai loves them and the MQM is a national party.” He dedicated the completion of the government’s tenure to “Altaf bhai’s” support, wisdom and his friendship with President Zardari. He assured him that wherever there were hostile elements, whether in Gilgit-Baltistan, Karachi, Balochistan or at the border, “We will take action.”

But Altaf was sitting ready with answers to all of Malik’s arguments. He retorted that they couldn’t save the country by labelling people separatists but by giving them their rights.

Talking about the Lyari operation he said, “When police were sacrificing their lives and the operation against extortionists was near success, the paramilitary forces backed out. The police said that they would resume the operation in 48 hours but the 48 hours never came.”

“Rehman Malik achay hain! Magar halaat achay nahi!” shouted Altaf. [Rehman Malik is good but the times aren’t]. Malik gathered enough wits about him to muster that he had heard all of these points made by Altaf and had carefully jotted them down.

The MQM chief was also unabashed in his criticism of the judiciary. “What body is responsible for making the law?” he asked. “Parliament or the judiciary? If parliament can’t make the laws then why don’t you send it home?” Referring to the dismissal of Yousaf Raza Gilani, he asked the chief justice why he didn’t take action against the director-general of the Frontier Constabulary who was involved in killing people, lawyers and journalists of Balochistan.

Altaf said that he had repeatedly said that he did not want Sindh to be divided. But despite that, Sindh’s nationalist leaders accuse me of dividing Sindh. “If they don’t shut up, then I will not stop my people from demanding the division of Sindh,” he thundered.