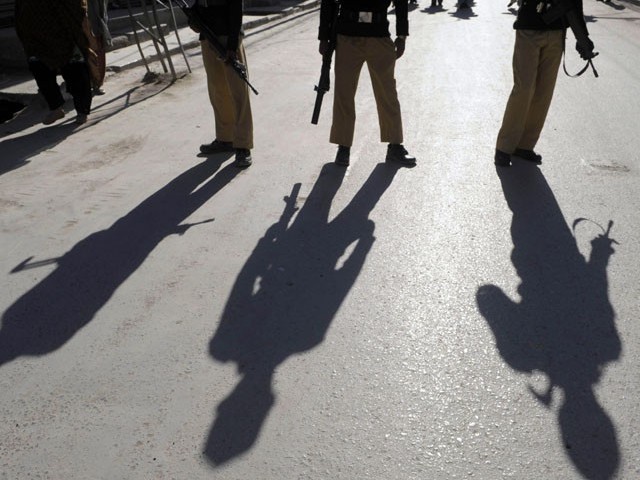 ASI Jamro, police constables Sial and Junejo were arrested, while others including, former SHO Samejo were absconding. PHOTO: AFP/FILE

SUKKUR: Gambat police have arrested four out of the six policemen late Saturday night, who allegedly forced a couple to walk naked from Mirbahar Muhalla to Gambat police station on the night of July 28. According to the arrested police officials, the couple was involved in adultery and had raided their house after being notified by area residents.

Earlier on July 28, a team of police officials in the town of Gambat, led by Station House Officer (SHO) Khair Mohammad Samejo arrested a man and two women and charged them with the aforementioned crime.

According to sources in the area, Mumtaz often invited escorts to his house, despite strong complaints from his neighbours.

On July 30, the accused were produced in court and their bail pleas were accepted. After the issue was taken up by the media, action was taken against SHO Samejo who was subsequently reverted and suspended, along with the other five officials.

Inspector Haq Nawaz Lolai has been given the charge of SHO Gambat.

Later, in the midnight police raided different places and arrested ASI Jamro and police constables Sial and Junejo, while Samejo was arrested Sunday night. The remaining two officials were absconding.

Attempts to contact SSP Baloch were in vain as his PSO Inspector Warris Bhutto said that the SSP was not available and he will call back as soon as he is available. However, hours later, the officer did not call back and neither did he receive the reporter’s calls.

Talking to The Express Tribune, Deputy Inspector General (DIG) Sukkur Dr Ameer Ahmed Shaikh, expressing his displeasure and anger over the incident, termed it an inhuman act, adding that although according to reports Mallah was not an ‘angel’, but the way the couple was paraded to the police station was disgraceful and intolerable.

He said that, earlier the SSP was not ready to believe that the couple was escorted naked to the police station until area residents and journalists told him about the incident.

Talking about former SHO Samejo, the DIG said that the man seems ‘sick’ and should be awarded exemplary punishment. The DIG had earlier said that the former SHO was ready to surrender and would appear before the SSP, tonight.

It is worth mentioning that former SHO Samejo was infamous for adopting negative measures for punishing the accused. During his posting as SHO Lakhi Ghulam Shah police station, he had put strings in the nose of an accused, who was arrested on alleged charges of robbery, and then had unleashed his pet monkey on him.

According to another incident, during his posting in Salehpat he had done the same with another accused, after which he was transferred.

Fiasco in Lahore: Drowning child turns out to be dead calf