US sees 'progress' with Pakistan in talks

US sees 'progress' with Pakistan in talks 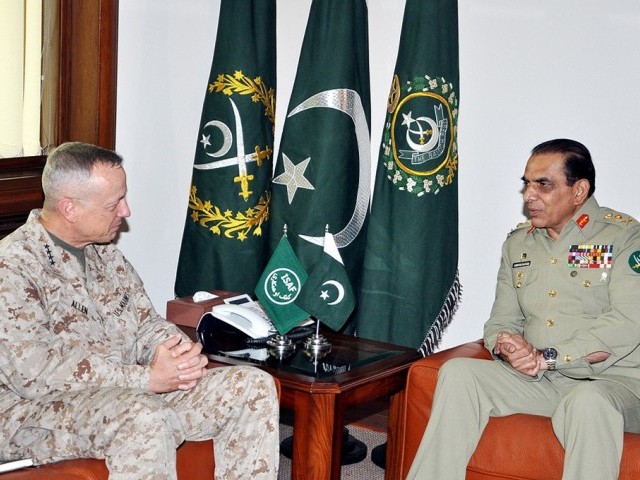 ISLAMABAD: The US commander in Afghanistan said Thursday that “significant progress” was being made in improving cooperation with Pakistan, after his first visit since Islamabad ended a blockade on Nato supplies.

The talks between General John Allen and General Ashfaq Kayani focused on improving security along the border between Afghanistan and Pakistan, and cooperation between Afghan, Pakistani and Nato troops, said a statement released by both sides.

“I look forward to these visits and am pleased with the upward spiral in our relationship they represent,” Allen said.

“We are making significant progress toward building a partnership that is enduring, strategic, carefully defined, and that enhances the security and prosperity of the region.”

Allen’s visit is a further sign of efforts to repair the fractious anti-terror alliance with Pakistan, which plunged to its worst crisis after US air strikes killed 24 Pakistani soldiers and American troops killed Osama bin Laden in Pakistan last year.

Both sides signed a deal Tuesday governing Nato convoys travelling through Pakistan into Afghanistan until the end of 2015, well beyond the scheduled withdrawal of the bulk of Nato troops in 2014.

Kayani was quoted as saying that Thursday’s meeting had “helped towards improving strategic and operational understanding between the Pakistan military and Isaf,” using the acronym for the Nato mission in Afghanistan.

The statement made no mention of the specific problems and difficulties that have increasingly characterised relations between Afghan, Pakistani and Nato troops.

US officials have called repeatedly on Pakistan to move against the Haqqani network whose leaders are based on Pakistan’s side of the border.

Afghanistan and Pakistan are also locked in public acrimony over attacks carried out across the porous and often unmarked border.

Pakistan says Taliban loyal to Maulana Fazlullah are using havens in Afghanistan to resume attacks in northwestern Pakistan three years after he escaped an offensive in the Swat valley.

Afghanistan has complained about cross-border artillery shells and rockets being fired from Pakistan into Afghanistan’s Kunar province.

Islamabad on July 3 lifted the longest blockade on Nato traffic during the war in Afghanistan after Washington said sorry for the deaths of the Pakistani troops who were killed in the air strikes last November.

Lieutenant General Zaheerul Islam, chief of Inter-Services Intelligence (ISI) agency, is also currently in the United States, the first visit by a head of the ISI to Washington in a year.