Olympics - Hijab no hurdle for Muslim sportswomen as bans eased

Olympics - Hijab no hurdle for Muslim sportswomen as bans eased

The modest forms of dress have long been a brake on female partic­ipatio­n in sport.
By Reuters
Published: August 2, 2012
Tweet Email 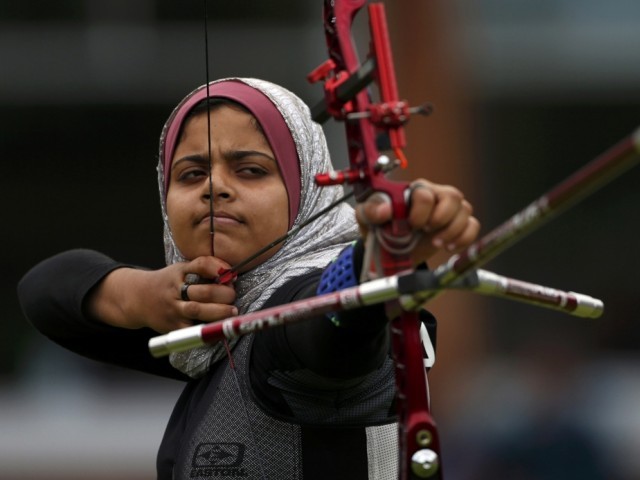 An Iraqi female takes part in women's archery at the London 2012 Olympic Games at the Lord's Cricket Ground August 1, 2012. The modest forms of dress have long been a brake on female participation in sport, but restrictions have now been eased. PHOTO: REUTERS

LONDON: Headscarf-wearing Muslim women are making strides at the Olympic Games, a year after the Iranian women’s soccer team broke down in tears at having to withdraw from a qualifying match because they wore hijabs.

Worn under a fencing mask, wrapped tightly in an elasticated bun for weightlifting or styled into a cap for shooting, the controversial headgear is finally winning acceptance from  sporting associations.

This week judo sports authorities and the Saudi Olympic Committee confirmed they had reached an agreement allowing a Saudi judoka to compete with her hair covered, and last month soccer’s rule makers also lifted their ban on the hijab.

The International Judo Federation had initially said Wojdan Ali Seraj Abdulrahim Shaherkani could not compete in a headscarf, which would have been a huge blow to aspiring Saudi sportswomen: she and runner Sarah Attar are the country’s first women to compete at any Olympics.

“This agreement shows that being a modest Muslim woman is no barrier to taking part in sport. It shows the inclusiveness of the Olympic spirit,” said Razan Baker, spokeswoman for the Saudi Olympic Committee.

Islamic states Brunei and Qatar have also sent female athletes to the Games for the first time.

The modest forms of dress demanded by more conservative societies or chosen by more pious women have long been a brake on female participation in sport, not only for Muslims but also for women of other faiths.

“Many Muslim women both in Britain and around the world are excluded or discouraged from taking up sports owing to their desire to maintain stricter standards of modesty than sports clothes allow,” said Emma Tarlo of the department of anthropology at Goldsmiths, University of London.

“And Muslims are not alone. A number of women from Hindu, Sikh, and orthodox Jewish backgrounds as well as people with weight issues are put off swimming by the skimpiness of most existing styles of swimwear,” she added.

Luckily, a number of designers are turning their attention to women keen to take part in sport while wearing modest attire.

In the Netherlands, designer Cindy van den Bremen has designed a range of headwear for sporty Muslim women dubbed “capsters”.

“The concept is based on the idea to give Muslim girls and their gym teachers in the Netherlands a safe alternative for the traditional hijab to wear during gym class,” Bremen says on her website.

Online vendor thehijabshop.com carries capsters under its “sporting range” under the categories “skate”, “aerobics”, “outdoor” and “tennis”, and touts the headgear as designed not to shift or tear during physical activity.

British-based Modestly Active’s line of Islamic sports gear includes swimwear and martial arts, basketball and soccer kits, which the company says have been specially designed with the latest sports technology to be breathable and durable.

Ismail Sacranie said he and his wife founded the company in 2007 after designing special clothing for their sports-mad daughters. Since then the response had been “phenomenal”, with orders from all over the world.

“We saw the restrictions that were faced by our own children. I have three daughters of my own, they’re just like any other teenagers, and why should a piece of fabric restrict them?” he said.

“My daughters were outraged and annoyed beyond comprehension at the fact that simply because somebody’s covering their hair they’re alienated,” he added.

Now one of his daughters, inspired by the British Olympic female soccer team’s wins over New Zealand and Brazil, is determined to join the national soccer team herself, where she will be able to wear her headscarf.

“It’s a huge statement for mankind to overcome these kind of barriers, and let the enthusiasm and professionalism of a person speak, rather than what they’re wearing,” Sacranie said.