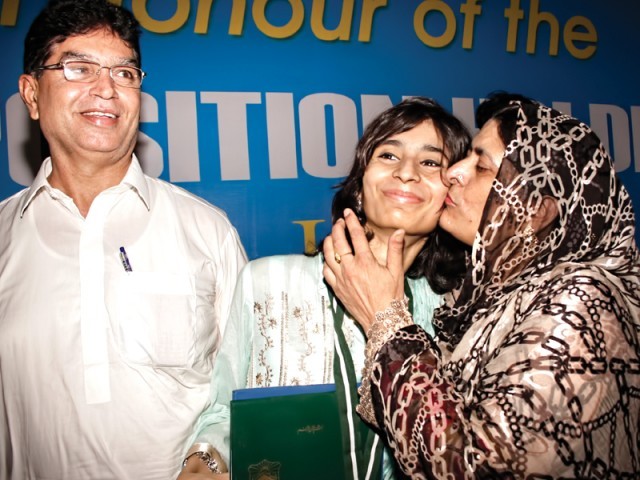 “I would study using a torch light during electricity outages,” Arooj Nasir, who secured third position amongst girls in the humanities group by scoring 960 marks, told The Express Tribune.

Speaking after the awards ceremony held for top students on Wednesday by Lahore Board of Intermediate and Secondary Education (BISE) at the Alhamra Cultural Complex, Nasir said it was difficult to focus on her studies due to the power crisis.

A student of City District Government Girls High School, Multan Road, she said, “I can only humbly request that our government provides us with electricity.”

Khaula Tariq, who secured third position amongst girls in the science group with 1018 marks, said she was dissatisfied with the examination methods. “It is all about rote learning,” she said. “Students should be taught to learn. Exams are just about marks.” Tariq, a student of the Divisional Public Higher Secondary School for Girls Model Town, said she wanted to become a neuro-surgeon.

Nashka Zulfiqar, securing overall first position with 1,021 marks, told the media she had been unable to sleep due to the excitement. Zulfiqar is a student of Fauji Foundation Model High School for Girls Sangla Hill, in Nankana Sahib district.

Sharing overall first position with Zulfiqar with 1,021 marks, Muhammad Sarmad Waqar said there were ample opportunities for the youth in Pakistan if they work hard. A student of Beaconhouse School Canal Side Campus, he said it was time for new people to lead the country. “I think Imran Khan deserves a chance,” he said, declaring his intent to pursue a career in civil service.

Arsalan Tariq, who secured an overall second position with 1020 marks, told The Tribune that he expected the success. “I had topped during the 9th grade examinations so the final results were not a surprise,” he said.

Tariq, a student of Government Central Model School Lower Mall, said he hoped to become an electrical engineer and to help resolve the power crisis. “Having suffered from outages during exams I know how pressing the issue is for everyone,” he said.

Speaking at the awards ceremony, Lahore BISE chairman Nasrullah Virk said the examination was completely transparent and error-free. He said all students could access their results online by visiting the Lahore BISE website, www.biselahore.com.

He said transparency was ensured in the entire examination process from pre-conduct to conduct to compilation and announcement of results. He said the students were facilitated during the pre-conduct phase by providing them roll number slips at their doorstep.

Anwar Farooq, the controller of examinations, said the attempt to provide students online results was a joint effort of the Punjab IT Board and the Lahore BISE. He said all results were declared on the scheduled date.

Speaking at the ceremony, Shahbaz said, “This is the day when dreams come true for these students and their parents.”

He said the Punjab Educational Endowment was providing funds to as many as 30, 000 students from financially constrained households to continue their education. He said the Punjab Education Foundation was allocated a budget of Rs10 billion, which included money to send 10 students abroad for education. He said besides Daanish Schools and the laptop scheme, the government had allocated agricultural land for agriculture graduates to allow them to utilise their expertise. He also asked the youth to “vote for Pakistan.”