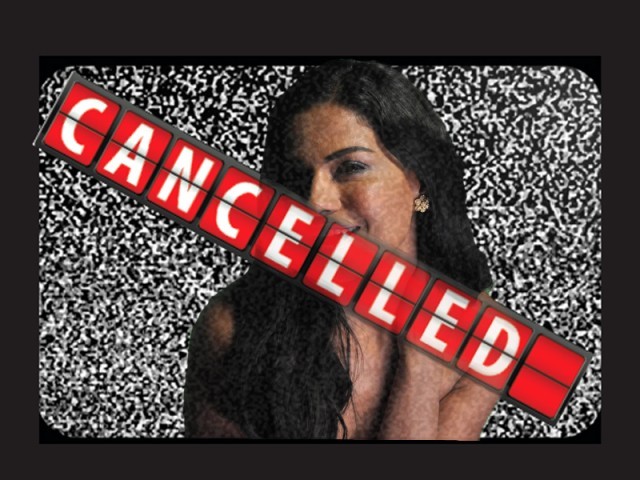 The idea of the controversial Veena Malik repenting for her sins on national television did not settle well with the awaam. From internet petitions calling for the Pakistan Electronic Media Regulatory Authority (Pemra) to ban the show, which had been scheduled to air during the holy month, to comments on social media forums, the anger was hot and unrestricted.

The furor and resentment around the show finally made the production team rethink their decision to air it. “Hero TV is for the awaam. If the awaam does not want to see Veena Malik on this Ramazan show, then we will cancel it,” said a member of the team, adding that they respect the wishes of the populace.

A YouTube user by the name Hamza Imran uploaded a video of his reaction to Veena’s Ramazan promo. Cursing heavily, he appeals to viewers:

“Can you imagine Veena Malik, who not so long ago stripped half naked with an ISI tattoo on her? She hasn’t got any right to be entering Pakistan, let alone being on a TV show that has such religion significance,” he says, holding his head, clearly appalled. He also adds that he has uploaded his video to “spread the message” to the show’s producers for its cancellation. “I’m not just going to be Facebooking or liking things online because that’s not going to make a difference. I want people to email Hero TV and send them hate messages and ask them to stop this. She’s a disgrace of a person. How dare she?”

Amidst the hue and cry around this controversial show, a few questions come to light. If Hero TV was “heroic” enough to take such an audacious stance (by inviting the notorious Veena on their sets) in the first place, why didn’t they simply stick to their guns and see it through? Some commentors suggest that it is a publicity ploy to garner attention for a channel that receives none at all. “What depths will the media plunge to next in the ratings game? Is there any hope for an informed, progressive and responsible media?” asks one irked commenter on The Express Tribune website.

A Pemra official told us that he was just as baffled. “What do media owners want?” he asked, requesting anonymity. “Could they not find anyone else? If they want ratings, can’t they get scholars with good reputations instead of fuelling extremism by bringing such controversial figures on TV?” he asked, adding that Veena and other televangelists are “hypocrites”.