The leader­ship of the two partie­s met at the Brothe­rhood headqu­arters in Cairo in June last year.
By Salman Siddiqui
Published: July 18, 2012
Tweet Email 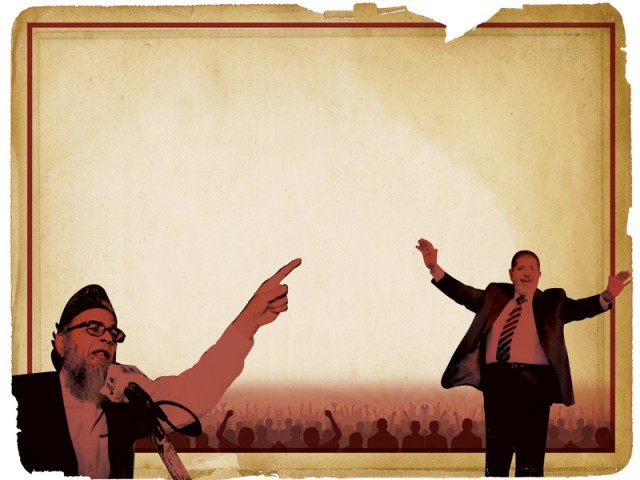 The leadership of the two parties met at the Brotherhood headquarters in Cairo in June last year. DESIGN: FAIZAN DAWOOD

The Jamaat-e-Islami (JI) maintains close ties with the Egyptian Muslim Brotherhood, a religious party which has recently found its voice again in mainstream Egyptian politics, and a group that the JI claims it has a lot to learn from.

The leadership of the two parties met at the Brotherhood headquarters in Cairo in June last year and decided to join hands to solve issues faced by Muslims all over the world and to promote the true image of Islam, according to a press release issued in the aftermath of the meeting.

In a sign of budding relations, when Muslim Brotherhood member Mohamed Mursi was declared the first president of Egypt since a popular uprising ousted Hosni Mubarak, a special ceremony was held in Karachi by JI’s local chapter.

“Congratulations to Ikhwane Muslameen (Egyptian Brotherhood) on their glorious success. The sacrifices of the martyrs Imam Hasan al Banna, Syed Qutb and thousands of activists have borne fruit in the shape of the revolution in Egypt. God willing, an Islamic revolution is Pakistan’s destiny too,” said a JI leader at the event.

When asked about the burgeoning relationship, senior JI leader Liaquat Baloch said, “It’s true that the politics and conditions of each country are different. However, as Muslims one enjoys a special brotherly bond with other Muslims and it is on this basis that we have maintained ties with the Brotherhood.”

The senior Jamaat leader said the relationship was based on a purely ideological level, adding that the JI would not be taking any dictation from the Brotherhood.  Baloch said his party’s recent visit to Cairo opened up a new chapter in relations, but emphasised that the ties had been maintained for decades.

“Their leaders too have visited Pakistan in the past and one of their central leaders had attended our convention last year,” Baloch said.

JI chief, Syed Munawar Hassan has also repeatedly said that the JI would struggle to unleash a revolution in the country, similar to the one in Egypt.

JI Karachi president Muhammad Hussain Mehanti said the Brotherhood has been a source of inspiration and it is in this spirit that the Idara-e Noor-e-Haq translates the works of their scholars Hasan al Banna and Syed Qutub in Pakistan. Baloch said the works of JI’s founder and revered scholar Maulana Maududi are also translated in Egypt.

“In Pakistan too there is an ongoing struggle to bring about an Islamic revolution. The real challenge we face here is to make the public responsible so that they too are able to make the correct use of their votes like the people of Egypt did,” Baloch said, adding that they had much to learn from the Brotherhood’s struggle in Egypt.

Historian and author of ‘Partisans of Allah: Jihad in South Asia’ Professor Ayesha Jalal said, “The Jamaat-i-Islami and the Muslim Brotherhood have been historically linked ideologically and have also had comparable social bases of support.

“If you add to this some broad similarities of context, most notably state authoritarianism, then the links between the two organisations become even more understandable.  So it is hardly surprising to find them expressing admiration for each other.”

Meanwhile, international best-selling author Ahmed Rashid said the Jamaat-e-Islami branched out of the Muslim Brotherhood, which was founded in 1929 by Hasan al Banna, who spearheaded a movement that spread across the Arab world.

However, the JI’s path into mainstream politics won’t take place without a makeover, similar to the one the Brotherhood underwent.

The Brotherhood, which shaped the ideas of Islamists and particularly of groups such as al Qaeda, went through a transformation in recent years, according to the author of ‘A to Z of Pakistani Jehadi Organisations’ Amir Rana.

“During Anwar Saadat’s dictatorship in Egypt, thousands of Brotherhood activists were jailed and it was then the group rethought its strategy of using violence to achieve their goals,” said Rana.

“The Muslim Brotherhood today has evolved into a modern Islamist organisation that promotes democratic ways and education for all,” said Rashid. “But the Jamaat-e-Islami remains backward and reactionary. Also, while the Brotherhood is putting up a fight with the military establishment, the JI here continues to be the bedfellow of the military in Pakistan,” he added.