“The gali-mohall­a cultur­e has made its way to Twitte­r.”
By Ali Mehdi
Published: July 15, 2012
Tweet Email 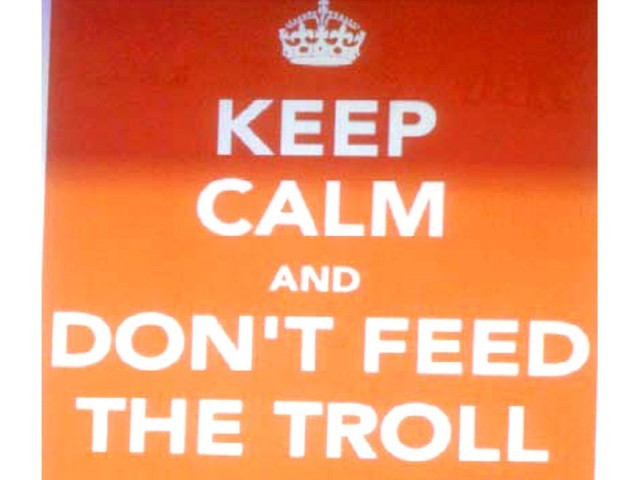 If you have a strong opinion on the legal status of Ahmadis in Pakistan or are in favour of giving India the ‘Most Favoured Nation’ status or on Imran Khan or Zaid Hamid, there’s a fair chance you have either been a victim of ‘trolling’ online or have tormented others with your ‘trolling’.

A troll, according to Shah, is a person who frequently engages in posting inflammatory, and often unnecessary, responses at online forums like Facebook and Twitter. Using foul language and sexual innuendos while trying to prove a point, as irrelevant as it may be, is one of the principal characteristics of an internet troll.

It was perhaps best that all the four panellists seemed to have had ample experience in dealing with such trolls. “People are dying in Kashmir while the liberal elites are gathering at a five-star hotel,” quoted Sayeed, referring to a blog post. “I mean, the two things do not go together.”

People take great comfort in the “power of the anonymous,” said Shah, while explaining the reason why someone might feel comfortable using uncouth language on Twitter, but not in front of an actual person. “[Anonymity] gives them a sense of safety.”

Another characteristic of the often-vile comment threads on Facebook, said Shah, is that individuals temporarily seem to exchange their individual identity with that of a “group identity.”

Rub Nawaz of Khudi PK, an organisation that “aims to be a platform whereby all avenues of education, media, civil action and arts and culture are employed to push back against…the poisonous rhetoric of extremists,” agreed with Shah and said that ‘organised trolls’ was one category where all such individuals would fit in.

All panellists acknowledged that trolls who support the Pakistan Tehreek-i-Insaf (PTI) as well as religious groups were among the best organised on the internet. Nawaz opined that the feeling of being part of a “revolution” was something that the ardent PTI fans and Islamists had in common.

Rumi, who was moderating the discussion, said on a more serious note that “perceptions matter [a lot] in Pakistan.” He went on to add that he had been labelled an agent of intelligence agencies of Pakistan, India and Israel. The snowballing effect of individual accusations “can get you killed.”

“The gali-mohalla culture has made its way to Twitter,” added Majeed.

Shah considered the issue to be more of a psychological one, however, and said that the level of discussions on internet forums like Twitter was actually a reflection of the society we live in. “The aggressiveness and people’s need to vent anger and frustration on social media reflects the current state of our society.”

Most of the panellists agreed upon the presence of a link between a person’s level of education and their behaviour on the internet. However, Sayeed named Maajid Nawaz as an example, who studied abroad but was also once a member of the Hizbut Tahrir.

When asked about the best way for columnists and bloggers to deal with the troll-ish behaviour, Shah said that she usually only responds to comments if they were really outrageous, but Sayeed works differently.  “I keep on commenting in order to better understand the other side,” he said.