How social media paved the way for discussing Saleem Shahzad

How social media paved the way for discussing Saleem Shahzad

“The human rights moveme­nt is built on the simple premis­e that inform­ation has power.”
By Sana Jafrani
Published: July 15, 2012
Tweet Email 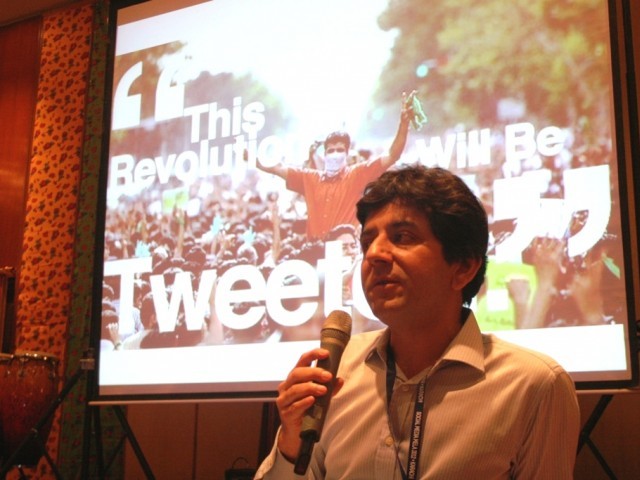 Speaking at a session focused on the effect of social media on human rights, Ali Dayan Hasan, Pakistan Director of Human Rights Watch (HRW) lauded the ability of the social media to quickly disseminate information and record the atrocities world over. But he also highlighted the limitations of the medium.

“With the internet anybody can be a publisher. The press is no longer the sole medium for exposing government abuse,” he said.  “However, the press is still very important. There can be a lot of noise in social media but if the policy makers don’t listen it doesn’t matter.”

However, added Hasan, Twitter and Facebook were great tools for mobilising the public opinion but not so good to have an effect at policy change by governments.  When HRW tweets some information, he said, it is echoed in the social media, this making its way to the mainstream media. “In a sense, it makes our jobs easier.”

Using a sobering example of how far-reaching the social media can be, Hasan discussed the disappearance of the late journalist Saleem Shahzad.  “Because Shahzad had left me with information whereby I could make a credible claim that he had received threats from intelligence agencies, I felt that I could put that information in the public domain,” he said.

He continued to explain that the tweets about Shehzad enabled the Pakistani media to discuss the issue. “Because they could cite Human Rights Watch, it made it easier for them bring it into the public domain,” he said.  “The purpose was for the man to emerge alive and tragically he didn’t.  As a result, the story became even bigger.”

The local channels began running the story with Shahzad’s picture after the attention it got on Twitter. Hasan said that this information is what made it easier to identify his body when it was found and consequently resulted in a post-mortem which eventually revealed that he was tortured to death. Often, Hasan pointed out, bodies are found and never identified.

“It is no longer possible for governments to hide the atrocities that they commit because the information is now available in real time.”  Hasan gave the examples of the Holocaust, Khmer Rouge and crimes committed by Saddam Hussain in Iraq.

“The human rights movement is built on the simple premise that information has power,” Hasan said. “If you can reveal what a government is doing to abuse its people you can change that behaviour.  Every government hates to have its human rights abuses spotlighted.”