Indust­ry inside­rs dish out on what it takes to be a model these days.
By Saadia Qamar
Published: July 15, 2012
Tweet Email 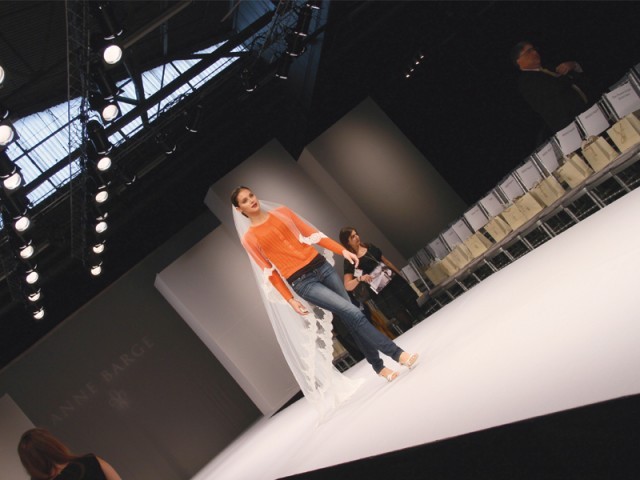 Industry insiders dish out on what it takes to be a model these days.

If you go by what you see in the movies, then the fashion industry is either an amoral cesspit (as in Jolie’s Gia and Priyanka Chopra’s Fashion) or else a collection of self-obsessed bimbos and himbos (as in Ben Stiller’s Zoolander). The truth lies somewhere in between. While this field may have its fair share of monsters and morons, modelling around the world is becoming a more and more organised profession and the same goes for Pakistan’s own modelling scene.

“Modelling is now a full-time career. It is an established field,” says Frieha Altaf, chief executive of Cats Modelling Agency, who herself graced many ramps and magazine covers in the 1980s as a former supermodel. “Contests to find supermodels are being held and the level of exposure is increasing. More and more people are becoming interested in making a career in modelling.”

And no doubt, the shot in the arm to modelling comes from the boom in the local clothing industry. Not long ago, only boutiques in Pakistan would stock local designer outfits and fashion shows were geared towards local audiences. Now, Pakistani designers are increasingly showcasing their collections at fashion shows from London to Paris, while fashion weeks in Lahore and Karachi are making headlines in international news. “Perceptions are fast changing, for clothes are a serious business,” says photographer Ayaz Anis, who has been in the business since 2008.

Still, the perceptions of what the modelling scene is all about remain quite different from the reality. Many still believe that all it takes to make it as a model is to look pretty and dress up nicely. Nothing could be further from the truth, says designer Syed Mohammad Rizwanullah, who describes modelling as the “the world of illusions,” and says that in reality, a lot of hard work is required.

“It is not a hobby anymore. It is a serious profession — one of the toughest jobs in the world,” says Rizwanullah.

As the field becomes increasingly professional, the standards for what makes a successful model have also changed and become far more stringent. Traits that were valued in a model even a few years back are no longer relevant while other qualities, such as professionalism and work ethic, have taken precedence. The selection process has also changed, reflecting the transformation into a full-fledged industry. Back in the days, young girls were hand-picked from schools and colleges but now ‘agents’ scout for them at unusual places like bus-stands and sidewalks and then groom them into camera darlings.

“Things used to be simpler. Girls hardly wore make-up and still managed to look attractive and be photogenic. That is how they were chosen,” says a fashion industry insider. “Now, a pretty face is only that once it is dolled up.”

So what makes a model stand out in the eyes of photographers and designers today? For one, size does matter. “If you are thin and tall, the camera loves you and make-up suits you,” says Rizwanullah. “One can be a good model if one understands this.”

While physique has more value than just a pretty face in models, it may go to waste if she cannot flaunt it with panache. Both Frieha and Rizwanullah assert that the profession is no longer for the timid or unassuming, and aspiring models must sport an attitude that makes them stand out.

“At Cats, we train models on every aspect, from how to walk [the ramp] to building the right attitude,” Frieha says. “As in every other profession in the world, you need confidence to do well as a model.”

Rizwanullah agrees. “Modelling, like fashion, is becoming very tough. It isn’t fair to generalise but if you want to last, you need to have a strong personality,” he says.

Flaunting a strong personality can get you places. It shines through in how the model carries herself and interacts with people — especially those who matter in the business. Some models even change their run-of-the-mill names to snazzier, attention-grabbing ones like Gia and Konain, who were originally Munza Mushtaq and Amna Baloch respectively. “You are your own product. You need to communicate. [Think of it as] your final presentation,” says Anis.

But in this world of cutthroat competition, is there an easier route to success? Does the casting couch really exist? Insiders confirm that models may indeed be asked ‘special favours’ by designers and photographers before they cast them in their shoots and shows. But this will only take you a short distance, says one industry insider. After that, it is your skill and hard work that earns you fame.

The presence of a few bad eggs and the ‘bad-girl’ image associated with models casts the entire industry in negative light. “Good girls and bad girls — it’s one of the biggest hypocritical thought processes in the world,” says Rizwanullah, who believes there is nothing like a ‘bad girl’ in modelling because all professional models who deliver results do so with integrity. The problem may lie with public perception of the field, and its products, which do not comply with the conservative ethos of society.

Nevertheless, increased recognition of the fashion industry, and hence modelling, as a professional field is leading to growing acceptability, bit by bit, in society. Fashion has trickled down to the masses in ways that dictates our everyday dressing, when we don a Kamiar Rokni print or a cheap imitation of it. “Change is the future,” says Rizwanullah, something that is evident in the fact that “in the past, fashion used to be for the elite, now  the masses follow fashion too.”

Killer coiffure can be yours!