Nato routes and our national pride

Nato routes and our national pride

Is there a lesson in all this for Pakist­an? Yes, three lesson­s.
By Editorial
Published: July 4, 2012
Tweet Email 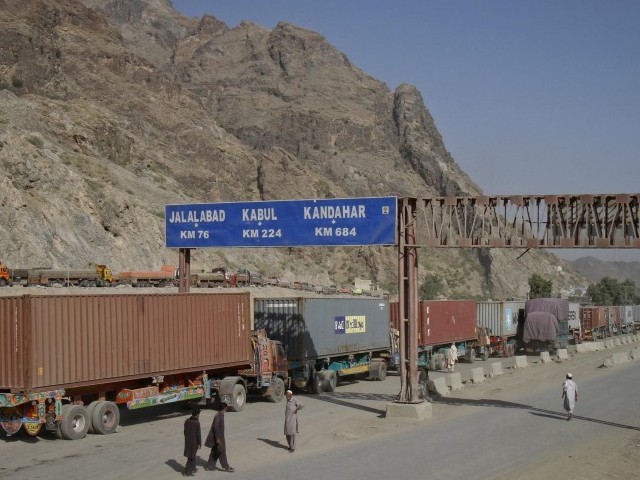 Men walk near a road sign showing the distance to cities in Afghanistan, as trucks drive past in the northwest town of Torkham, at the border crossing to Pakistan, July 4, 2012. PHOTO: REUTERS

Pakistan has lifted its seven-month long ban on the Nato supply route in return for an apology from the State Department in Washington. The ‘conditionality’ set by parliament in Islamabad contained two items: apologise and stop the drone attacks. The first seems to have been taken care of, given US Secretary of State Hilary Clinton’s remarks on July 3 where she offered her “deepest regrets” at the loss of the lives of Pakistani soldiers in the Salala attack. The second could be resolved in a resolution in a recent development whereby it was reported that America and Pakistan could perhaps, undertake “joint defence” against militants/terrorists. The Defence Committee of the Cabinet (DCC) in Islamabad has put its stamp of approval on the deal, which will net Pakistan over a billion dollars of aid plus, possibly, fee for each supply truck that passes through Pakistan.

Clearly, the army, which runs policy in Pakistan, is on board. The decision to go soft was taken a month earlier when Foreign Minister Hina Rabbani Khar had announced that Pakistan was mindful of the economic and political power of the Nato partners of the US and could not afford to alienate them by making their forces suffer in Afghanistan due to the stoppage of their supplies. She had also announced that Pakistan was willing to separate the matter of drones from the supply route issue and would pursue it with Washington till an agreement was reached in favour of Pakistan.

Pakistan has a way of inserting itself into traps that it cannot abide for long. The army lost its cool over the killing of Osama bin Laden in Abbottabad in May 2011, little realising what it looked like to the outside world and went over the edge when the Salala incident took place in November. Vent was given to rage, which should have been controlled for the sake of national interest. The media was allowed to go berserk spreading passions of revenge the country was too weak and too wracked to satisfy. The next wrong thing to do was handing over the issue to parliament where much was made of national ‘ghairat’. The foreign policy of any state — powerful or weak — must be separated from matters of national pride so that statesmanship can be practised and conflict avoided.

The big mess that sincere observers soon began to note was the delay that parliament was allowing in its preparation of  ‘guidelines’ for Pakistan’s foreign policy. It succumbed to the baser instincts of revenge and offering insult and let slip the moment when America was more favourably inclined to accept Pakistan’s stance. In this period of bad blood, Pakistanis forgot their more pressing crises and focused on America’s apology, which they thought should be self-demeaning in the extreme. On the other hand, there was much negative and ‘terminal’ (like the dismissal of prime ministers) going on in Pakistan to provoke the columnists in Washington into dubbing Pakistan a state in conflict with itself.

Then, someone unleashed the Difa-e-Pakistan Council (DPC) on the long-suffering people of Pakistan. Made up of shady semi-terrorist elements and mujahideen that the state once employed in its asymmetrical wars, the DPC asserts that they will engage only in peaceful agitation against the decision.

Although it is quite clear from all this that Pakistan did mishandle the situation, but as the senior partner in this relationship, the US could have also done well to express its regrets over the Salala incident much earlier. That would have led to a quicker normalisation of relations and cooling of tempers on both sides and would have also enabled both the governments to solve the issue of the Nato supply routes much earlier.

Is there a lesson in all this for Pakistan? Yes, three lessons. Don’t fly into a rage of ‘ghairat’ because states don’t do that. Don’t hand over diplomacy to parliament, which is bound to mess things up further. And no matter what happens, don’t isolate yourself in the world because in today’s state of international law, isolation is another name for defeat.