Trucke­rs say they are ready to start suppli­es in 'days', but need protec­tion from Taliba­ns who issued fresh...
By AFP
Published: July 4, 2012
Tweet Email 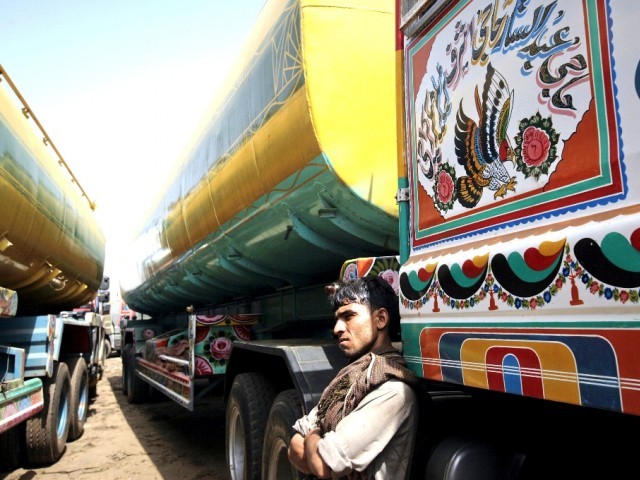 A driver stands with his tanker ready to supply fuel to Nato troops stationed in Afghanistan. PHOTO: REUTERS

ISLAMABAD / MIRANSHAH: Even as Pakistan and the US move towards an amicable resolution of the Nato supply routes with the former opening borders and the latter not ‘price gouged’, new dangers have emerged which threatens to derail the matter once more.

Soon after the US issued a mild apology for killing more than two dozen Pakistani soldiers in a cross-border check post attack, paving the way for Pakistan to reopen the supply lines, the Pakistani Taliban warned that they “will not allow any truck to pass and will attack it.”

“We will not only attack the supply truck but will also kill the drivers (of NATO supply trucks),” Taliban spokesperson Ehsanullah Ehsan said.

Celebrations by truckers, who will be the ones ferrying the goods through Pakistan and into Afghanistan, were cut short by this stark reminder. They demanded security for their drivers and trucks for resuming supplies.

Prior to the closure, Pakistani Taliban carried out dozens of attacks, disrupting supplies for 130,000 US-led NATO troops fighting in Afghanistan, and have repeatedly warned of more if Pakistan reopened supply routes.

Following the official announcement NATO truckers said they feared more attacks and demanded security guarantees before the resumption of the supply routes.

With the apology and subsequent route reopening catching drivers unawares, they expressed readiness to deliver their cargo.

“It is a sudden decision but even then we can start supplies in days. The thing is, who will protect us,” Shahwani said.

Pakistan’s announcement came shortly after US Secretary of State Hillary Clinton said Pakistan was re-opening the routes and that the United States was “sorry” for the losses suffered by the Pakistani military in November.