Activi­sts accuse the regime of drivin­g a sectar­ian agenda and depict­ing itself as the victim of an extrem­ist threat.
By AFP
Published: July 3, 2012
Tweet Email 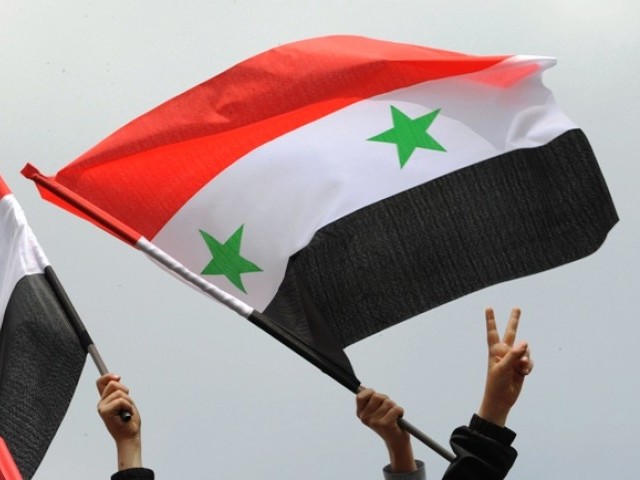 Activists accuse the regime of driving a sectarian agenda and depicting itself as the victim of an extremist threat. PHOTO: AFP

BEIRUT: When Syrian security forces detained Christian activist Abu Jad for two months, they beat him severely, punishing him for joining a revolt the regime has tried hard to portray as extremist and sectarian.

Like other activists in Syria, the man who identifies himself as Abu Jad says the 15-month uprising against President Bashar al-Assad includes voices from all religious backgrounds.

Activists and analysts accuse the regime of driving a sectarian agenda and of depicting itself as the victim of an extremist threat, in order to turn the rebellion into an all-out war between communities.

They say the regime treats non-Sunni Muslim detainees as viciously as their Sunni peers, while propagating fear among minorities that a successful revolt would spell their demise too.

“Everyone gets beaten in detention, but they really singled me out,” Abu Jad told AFP via Skype.

“They swore at me and at the Christian religion, and focused on beating me on the arm, because I have a tattoo of the cross there.”

Abu Jad says he was caught, along with Muslim friends, putting up a poster that read: “Man does not live by bread alone, but by a little dignity and freedom,” an adaptation of a line from the Bible.

According to Fabrice Balanche, director of the French research centre Gremmo, 80 percent of Syrians are Sunni, while around 10 percent belong to Assad’s Alawite community, five percent are Christian, three percent Druze and one percent Ismaili.

Residents of the central town of Salamiyeh, who are mostly Ismaili, have staged frequent anti-regime protests since the revolt broke out in March last year.

“Our protests disprove the regime’s claim that the revolt is Salafist,” said activist Iyad al-Salmuneh.

Peter Harling, of the Brussels-based International Crisis Group, says the country’s Christians and Druze are split down the middle over the uprising, while most Alawites, outwardly at least, still side with the regime.

The conflict has already become “predominantly sectarian in central Syria, where Alawites live side by side with other communities,” Harling said, referring to the religious group to which Assad’s family belongs.

One of the reasons for this, he argues, is that “the security apparatus has been designed in ways that ensure that meaningful power generally rests in the hands of Alawites.”

“A religious narrative was to be expected,” as violence soared, he said.

In spite of this, many in Syria’s minority communities have not thrown in their lot with the regime, partly because of its failure to provide solutions, he said.

“The regime has worked hard for decades to destroy the sense of citizenship in Syria, and it is pushing people to think in a sectarian way,” she said.

“For now, participants in the revolt continue to resist, but only God knows what will happen later.”

Activists say fear-mongering is not only propagated through state media, but also through military tactics on the ground.

In Qusayr, in the central province of Homs, regime troops set up a checkpoint just outside the town’s main church, Salem, a Christian activist who declined to give his surname, told AFP via Skype. “They were shooting at anyone who dared walk past it.”

Although many non-Sunnis from his town sympathised with the revolt, most were afraid of expressing their views, said Salem.

“Minorities who join the revolt are like a thorn in the regime’s side, so people are scared of what might happen if we get detained,” he added.

Writer and television series director Fouad Hmaire said most Alawites that he knows have not turned on the regime. “They are scared of both the regime and the extremists,” he said.

“At the same time, the regime has either given many Alawites power, or convinced them they are better off sticking with the regime,” said Hmaire, himself an Alawite.

He stressed he remained committed to the uprising, because he wanted “to be treated like a citizen, not like a member of this or that sect.”

“The regime wants to keep everyone tied to their sect, as opposed to thinking about the country,” said Hmaire.

“The regime and its supporters are pretending to be victims of an extremist threat, whereas it is they who are a threat to the whole of the population.”