With small fines, tree fellers get free rein in Karachi

With small fines, tree fellers get free rein in Karachi

How advert­isers skirt the law at the cost of the city’s green cover.
By Shaheryar Mirza
Published: July 3, 2012
Tweet Email 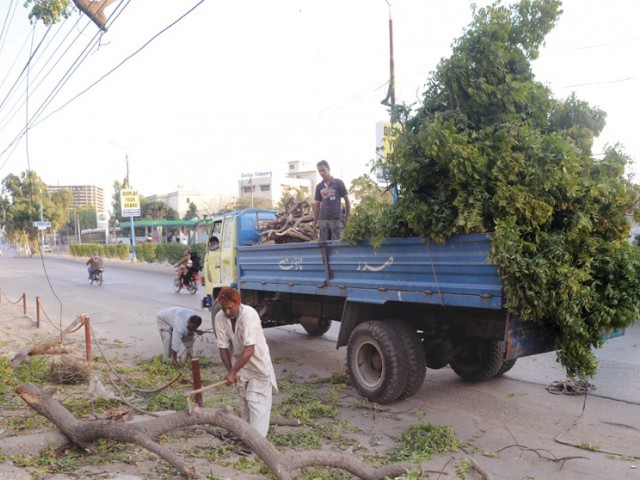 Trees are being cut down in at Ziauddin Ahmed Road despite the fact that the city is already oxygen deprived. The trees are usually chopped to make way for billboards. PHOTO: FILE

In the big business of billboards, trees are just a 25,000-rupee nuisance. Pay the fine up front and you’re good to go.

An official revenue estimate for advertisers is Rs1.2 billion a year but advertisers say you can rake in up to Rs5billion a year. Estimates are rough at best; there is no account of the money that exchanges hands over advertising on bridges. This means that there is plenty of incentive to clear the way and trees are Karachi’s biggest casualty.

The International Union of Conservation of Nature (IUCN) estimates that only 2.5% of the city is “green” which is why Karachi is already oxygen-deprived. It is not as if there are no laws to protect the greenery. The Pakistan Environmental Protection Act of 1997, The Sindh Plantation, Maintenance of Trees and Public Parks Ordinance of 2002 and Article 9 of the constitution all protect trees. “No person shall remove, cut, damage, or displace any plant, shrub, tree or a branch at any public place, including, a park,” specifies the 2002 law.

Violators can be fined 25,000 rupees per tree – money that is meant to go towards planting more.

“If the Karachi Municipal Corporation gives out an advertising site and there are trees in the way sometimes they will just pay the fine up front and then cut the trees,” explains environmental activist and lawyer Qazi Athar Ali. “The Karachi Municipal Corporation (KMC) and the parks department are well aware of the laws but when it comes to compliance, things are worked out.”

When it comes to “paying the fine up-front”, a pioneering veteran in the advertising industry, Rafi Abidi says that anything is possible in the profession. “I won’t say it is happening all the time, but it does happen,” he said. “I think it’s a crime and corruption has seeped into so many aspects of our society.”

There are many ways to work around the laws. Some men pour acid on to the trees, which wilt and die after a short while, clearing up the space. In other cases, you can arrange for a convenient road accident that brings the trunk down.

The city’s department that handles outdoor advertising has the power to grant companies permission to put up advertising. Its officials distanced themselves from the fine-and-fell phenomenon. “We have absolutely nothing to do with this,” argued Akhtar Shaikh, the director.   According to him, they have a map specifying where advertising is permitted. “If there are trees [at a spot] we don’t even give the site out,” he said, adding that the parks department can book violators. He added, however, that if trees are cut to make way for advertising, it is the work of advertisers acting “without permission”.

KMC may attempt to lay the blame with advertisers or the parks department, but advertiser Abidi rubbishes this excuse. “It is very easy to identify the culprits,” he said. “All you have to do is see which billboards become more visible than they were before [the trees were cut] and you will know who is responsible.”

At a recent seminar on the environment organised at the Institute of Business Management, Karachi’s former mayor Mustafa Kamal admitted himself that the city was cutting trees to make space for advertising. He mentioned that this has been happening on the city’s main artery, the lucrative real-estate strip of Shahrae Faisal.

Qazi Athar Ali and the KMC’s Shaikh allege that trees are also being cut by a utility. Just over the last couple of days several Neem trees were cut down in Nazimabad Block J and residents were told that it was for their safety as the monsoon was approaching and electricity wires and poles posed a danger. Much the same was seen at Nagan Chowrangi where dozens of trees were seen lying by the roadside, felled at the stump.

For such scenarios the laws do allow some leeway for the “trimming” of trees but Qazi Athar Ali says this provision is commonly abused. He complained that people were also using the excuse of security to cut trees for CCTV cameras.

Repeated attempts were made to contact the parks department but no one was available to give an official version on the issue.

Past glory?: ‘Disgruntled workers not good omen for PPP’