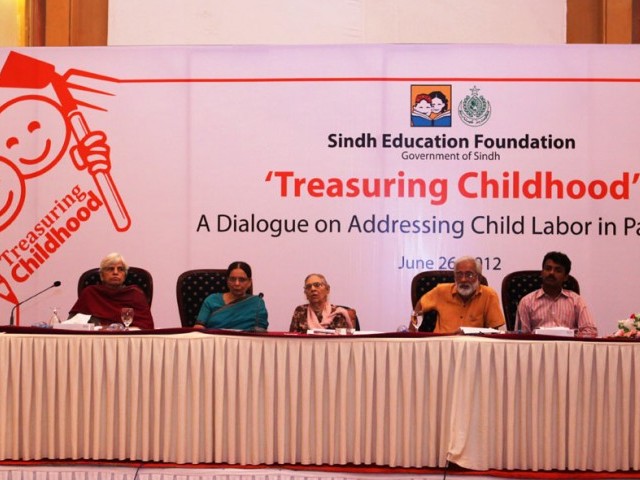 Prof. Anita Ghulam Ali, stressed that these books will play a pivotal role in creating awareness among the learners.PHOTO: NNI

KARACHI: The prospect of eliminating child labour entirely from the country is turning out to be an unrealistic goal as experts on the issue asserted that it is more pragmatic to try and instill as much education into the lives they already lead.

They added that the economic circumstances of most children, who are exploited as child labourers, tend to be so dire that taking them out of it completely has severe repercussions for their families. But that does not mean that they cannot be helped.

“We can’t take kids out of their work, educate them and fulfill their income requirements,” said Prof. Anita Ghulam Ali, the Sindh Education Foundation’s (SEF) managing director. “All we can do is help them get educated in the process.”

Ali was speaking at the seminar, titled ‘Treasuring Childhood: A Dialogue on addressing Child Labour in Pakistan’, arranged by the SEF, an organisation that’s primary objective is to facilitate the Sindh Education Department in helping marginalised children of Sindh. The organisation is chaired by the Chief Minister Qaim Ali Shah and its vice chairperson is the Minister for Education and Literacy Pir Mazharul Haq.

Another representative of SEF continued on the theme of pragmatic goals stating “Not only can we help them get an education, but we can also try to make their workplace less exploitative.”  According to SEF’s studies, 61 per cent of children in Sindh are studying, six per cent are working and 33 per cent are non-working. According to Terre de hommes’ country coordinator, Salam Dharejo, one out of every eight children in Pakistan is involved in child labour.

“After the legislation passed in 1991, only dealing with formal sector of the economy, there has not been a single piece of legislation on child labour,” said Dharejo. “Around 71 per cent of child labour is in the agriculture sector and there is absolutely no law to deal with this.”

Dharejo says that domestic child labour is a hazardous form of labour despite what many people may tend to assume. He also added that in Pakistan, Islamabad has the highest magnitude of domestic child labour while in provincial breakdown, the highest is in Punjab followed by Sindh, Khyber Pakhtunkhwa and then Balochistan. Child rights activist Dr Habiba Hassan agreed with Dharejo’s assessment saying that almost every child involved in labour has health issues that are specific to the industry they work within. But she then opened up the discussion saying it shouldn’t be limited to health or education. “What you need is a comprehensive strategy. Until you have family planning, employment, empowerment and education of women, and adult literacy, you cannot solve these problems because they all come together and are part of other issues that have to be addressed,” elaborated Hassan.

Renowned journalist Zubeida Mustafa told the audience that the media has an important role to play in raising awareness but it is not doing its job. “We should try and make a code of ethics that requires each channel to devote at least a certain amount of time to human issues like health and education. The electronic media has greater reach than the print media,” said Mustafa.