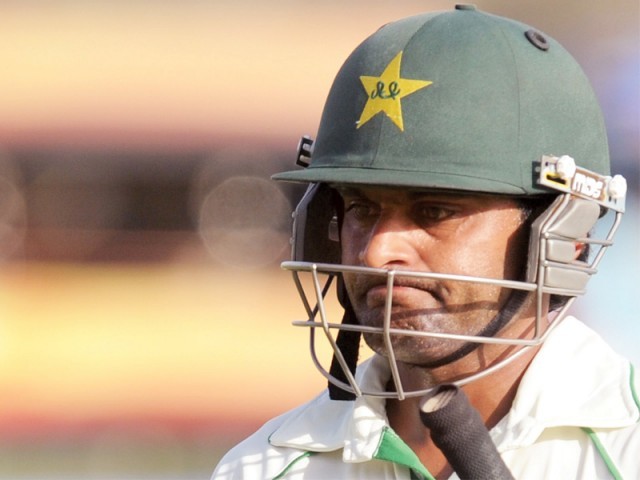 Reduced to 36 for three in second-innings, need another 474 to win against Sri Lanka. PHOTO: AFP

Sri Lanka turned the screws on Pakistan in the first Test in Galle after battering the tourists with both bat and ball on the third day.

Sri Lanka bowled Pakistan out for 100 in the first-innings after making 472, with off-spinner Suraj Randiv grabbing four for 13 and left-armer Rangana Herath taking three for 30. The hosts surprisingly declined to enforce a follow-on despite a substantial lead of 372 and made 137 for five in their second knock when captain Mahela Jayawardene declared in the final hour.

Pakistan, set an improbable victory target of 510 runs, were then reduced to 36 for three by stumps after Nuwan Kulasekara dismissed stand-in captain Mohammad Hafeez and Taufeeq Umar.

Herath had Azhar Ali, leaving nightwatchman Saeed Ajmal (11) and Younus Khan (0) at the crease. The hosts, overwhelming favourites to go 1-0 up in the three-match series, have two days to force a result on the spin-friendly pitch despite forecasts of wet weather.

The Test has been marred by at least 10 contentious decisions by umpires Steve Davis of Australia and Ian Gould of England, with six of them going against the tourists. But the Decision Review System (DRS), which allows reviews by the television umpire, is not being used in this series.

Pakistan coach Dav Whatmore said he was surprised the DRS was not available when it was used for Sri Lanka’s two home Tests against England in March and April. “They had it for England, so why not here?” Whatmore, who guided Sri Lanka to the World Cup title in 1996, asked reporters. “It does not seem right to me that you have it for one series and not for another.

“The DRS should be made compulsory. That will go a long way in helping a lot of things — anything that will help make correct decisions.”

Asked if Pakistan will make an official complaint, Whatmore said he would not make a public comment on it. “Whatever I need to say will be done through official channels.”

Earlier, Pakistan, who barely managed to surpass their lowest total against Sri Lanka of 90, were bundled out at the stroke of lunch after resuming the day at 48 for five.

The tourists were dealt a cruel blow within the first 30 minutes of play when Younus was given out leg-before for 29 by umpire Davis. Television replays showed a clear inside-edge off the bat on to the pad and a surprised Younus, who had scored 14 of the first 17 runs of the day, stood his ground before walking off.

There was little resistance offered by the tail as Pakistan were bundled out, conceding a hefty first-innings lead.

Army to give tips to Pakistan hockey team