An era in learne­d storyt­elling has ended. I have lost a pir, a great friend & mentor. OB, you will foreve­r be missed.
By Salman Rashid
Published: June 24, 2012
Tweet Email 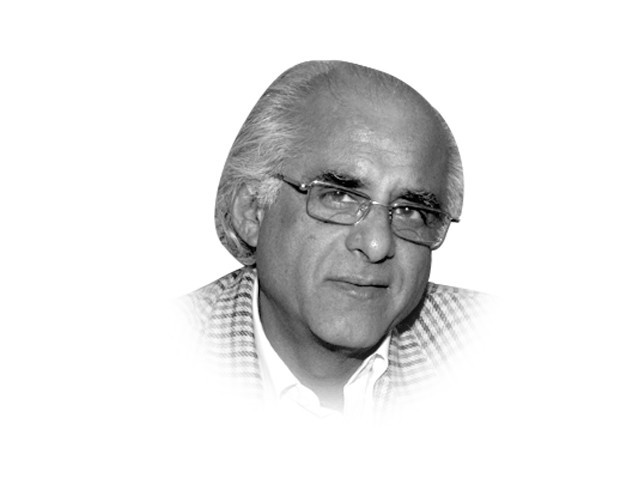 The death of Obaidullah Baig on Friday, June 22, brings an era of storytelling to an end. Baig sahib to strangers, this wonderful man was OB to all of us who were his friends, regardless of how much younger we were.

I first knew him back in the early 1970s when he did a travel documentary on PTV. Titled “Sailani kay Saath”, this programme introduced me to a Pakistan I did not know existed. There he was, square-cut handsome face, heavy framed glasses, dark hair neatly parted on the left side and meticulously combed, grey (on black and white TV) safari suit and a microphone in hand facing the camera in an exotic place in some remote outback of Pakistan.

It was a rich gravelly voice with perfect pronunciation and an enviable command of the Urdu language that told us of far off places in a very educated way. I never missed a show and as time went by, I came to admire OB for his knowledge about all the places he presented to his viewers. There was such compelling magic in his narration that each show filled my mind with an unsurpassable urge to go where OB had been. At the end of each programme, I would wish OB had a daily show instead of a weekly one.

It was sometime in the early 1990s that I first met him, when he enjoyed nationwide fame as a television personality. But OB, a perfect gentleman, was made in the classic cast that we were soon to lose forever. He was not filled with notions of self-importance; there was no arrogance about his achievements and renown. It was a very ordinary, unpretentious, extremely warm and friendly OB that I got to know. It was as if I had met an old friend after a very long time.

OB was gracious to a fault. He once told me a tale that I knew was historically incorrect. So, I lent him my copy of the voyage of Nearchus. The book was returned with pages marked in pencil (I never erased them) and ever afterwards, OB would tell me, even in the presence of others, that I had corrected a misconception. And when I referred to him as my guru, the retort came quick, “As the chela, you have far overtaken the guru”.

OB was a class apart, a man of great largesse of the soul; secure in the infallibility of his own expertise and knowledge, he was too great a soul to ever feel the need to belittle another person. Over the past quarter century, I have had occasions to deal with many so-called ‘great men’ of the country. Invariably, I have found them possessed of feet of clay; insecure despite their acclaimed achievements. OB was far from them.

Today, when I see women and men with far lower achievements vaulted to national fame — for whatever it is worth — by utterly substandard television, I am nauseated by their airs. The several channels air so-called travel documentaries hosted by brain-dead youngsters who know nothing about the places they pretend to speak about. The usual refrain is, ‘We are at so and so historical site; let’s ask the chowkidar about its history’. Little do these morons realise that if the poor chowkidar had the capacity to know history, he wouldn’t have been a lowly chowkidar.

And the abhorrent language! These brainless zombies know neither Urdu nor English: they are simply incapable of uttering one complete sentence in either language. But then, it might be that they wish to cloak their intense ignorance under a smattering of a few words of English which, unfortunately, is mistaken for a sign of class and education.

OB winced when I mentioned these vapid, inane shows. But it was not he to censure the current trend. He smiled and said nothing. I would have embarrassed him had I said these modern presenters know no better because they are not acquainted with his work: they have no paradigm to set their work against. Their ignorance of the doyen of travel documentary makers in Pakistan is their loss.

Now OB is no more. An era in learned storytelling has ended. I have lost a pir, a great friend and a mentor. OB, you will forever be missed.