The cafe is locate­d in Edward House, which is owned by the Cowasj­ee family.
By Saba Imtiaz
Published: June 24, 2012
Tweet Email 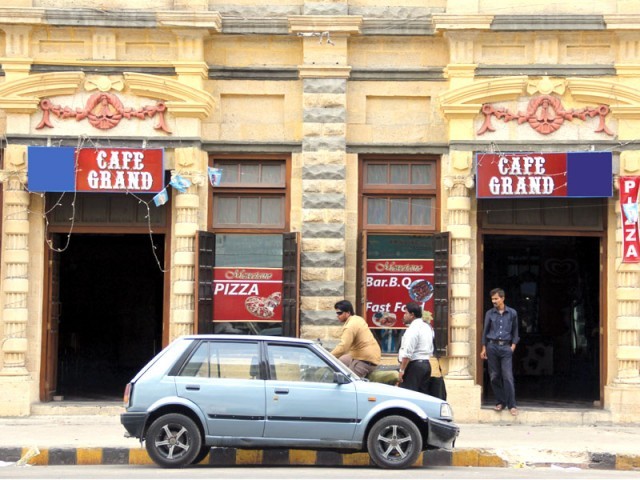 The cafe has been home to several establishments through the decades. PHOTO: AYESHA MIR

Cafe Grand’s facade is subtly ingrained in one’s memory. Thousands drive past the cafe every day and while it is largely empty now, in its heyday the people who would patronise it included Pakistan’s founder Mohammad Ali Jinnah. “It was a domain of the elite,” says Arif Hasan.

Located in the protected heritage site Edward House, which is owned by the Cowasjee family, Cafe Grand has been home to several establishments through the decades: a famed patisserie, a Korean restaurant and a diner serving Pakistani food.

Rafi Azeemi now runs Cafe Grand. He worked as a quality control manager and a station manager at Pakistan International Airlines for 35 years, and wanted to channel his globetrotting experience, coupled with the cookbooks he had collected, into Cafe Grand’s latest reincarnation.

Azeemi became involved with Cafe Grand after he saw an advertisement in the newspaper by an investor who was looking for a partner. The refurbished cafe opened up this January as a fast food joint serving Mexican-inspired dishes, pizza and burgers. Azeemi sourced everything from abroad, including the crockery. “There was no electricity, water or gas when we renovated this place. We did everything, including get new tiles that are fashioned to look like they are old,” he says. After it reopened, they had a considerably good response.

But after a couple of months, the steady stream of customers has trickled down to a few police officers and office workers who dawdle in and eat greasy plates of biryani.

The supply of coffee beans he brought has gone stale, the fryers are dusty and the pizza oven looks unused. The beautiful crockery is full of oily curry, not the fast food he had imagined serving customers.

The would-be restaurateur’s plan has gone wrong and he’s despondent.

“I sold my wife’s ornaments, my personal car to renovate this place,” says Azeemi, who is nearly 70. “I have a family to support.”

The honeymoon period is over. Azeemi bitterly complains his partner doesn’t even sit down with him to discuss the dire state of affairs of Cafe Grand.

Azeemi blames the lack of “management experience” needed to run the restaurant. “I can cook, but this needs a manager.”

There are several other factors at play. Because Cafe Grand is now located in the ‘Red Zone’, cars can’t be parked in front of it. Any other parking areas are taken up by nearby businesses.

While in Lahore, the provincial government is set to open up another long-forgotten cafe, the Pak Tea House, in Karachi Cafe Grand is unloved, disused and failing to attract the hip young crowd it once could. It’s a familiar tale, but Azeemi – who says he is losing hope by the day – still sees a way to turn this around. “If we contract this place out to a Chinese food restaurant, it could do well. There is no good Chinese food available in the area and that could attract office workers,” he says. A Chinese restaurant, he feels, will attract families who come after 7 pm, when offices are closed so they can park.

Edward House was designed by the prominent architect Moses Somake, who is also to credit for Flagstaff House and the BVS School. It is located on Abdullah Haroon Road. It housed Cumpert’s Cafe Grand, which was frequented by the city’s elite, particularly politicians and bureaucrats, according to Arif Hasan. “Jinnah used to visit it, as well as Ghulam Mohammad and Suhrawardy. According to the owner, who used to be my client at one time, they used to set a table aside for him so he could have his whiskey. Until her death, Fatima Jinnah would order sandwiches and patties from there for her high tea parties,” he said. Hasan said that with the fall of Zulfikar Ali Bhutto and the end of Karachi’s nightlife, it deteriorated and the management changed hands.

The antiquities department restored the building’s facade earlier this year.