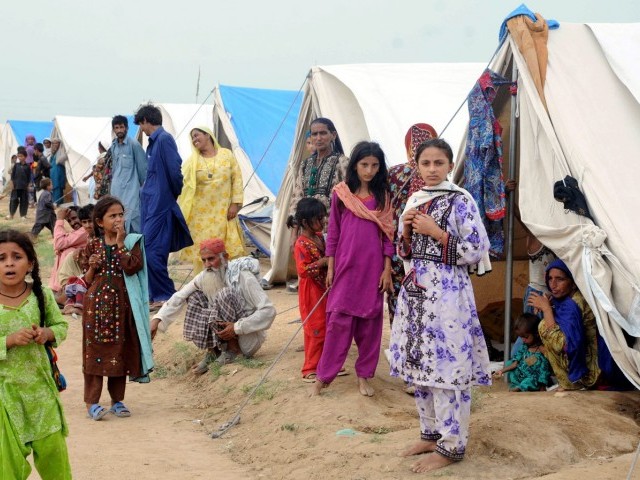 KARACHI: More than 18,000 flood survivors arrived in relief camps and tent villages set up by the City District Government Karachi by Sunday evening.

Over 5,000 people arrived at the Polytechnic School and tented village in Razzaqabad while the relief camp at the Workers Welfare Board Flats and tented village received more than 12,000 people. Some 500 displaced people reached ST-8 GBSS Cattle Colony in Bin Qasim Town and 550 others came to ST-5 GBSS Cattle Colony. More than 200 displaced people arrived at a camp at the Lyari Resettlement Colony on Hawkesbay Road and 96 survivors came to the camp at Merwat Park, Mehmoodabad.

NADRA has started registering the people who were visited by Administrator Fazlur Rehman on Sunday. A special 50-bed ward has also been set up for them.

Meanwhile, Sindh Home Minister Zulfiqar Mirza said that the provincial government will provide all basic facilities to the flood-affected people. He visited the camp set up at Razzaqabad, where he promised security and food for the people living there.

What next for Thatta?

In district Thatta, protective embankments for the River Indus at Minarki, Sorjani and Sonda are braving the rising pressure. Irrigation officials and army personnel are monitoring these embankments around the clock. Sixty per cent people from the kaccha area have been moved to relief camps. On other hand, illegal embankments built by landlords to protect their crops were demolished by revenue officials and police.

Meanwhile, Sindh Chief Minister Qaim Ali Shah had an aerial visit of the flood-hit areas, including Jacobabad, Kashmore, Sukkur and Ghotki. He asked the officers to expedite the work on strengthening the embankments of the canals and rivers. He visited relief camps at Sukkur Airport Road and met the displaced people. He inspected the facilities and listened to their problems. He also went to the Sukkur Bypass.

He said that the affected people would be shifted to Karachi and camps have also been established in other parts of Sindh, including Hyderabad.

‘Next wave of floods will be manageable’