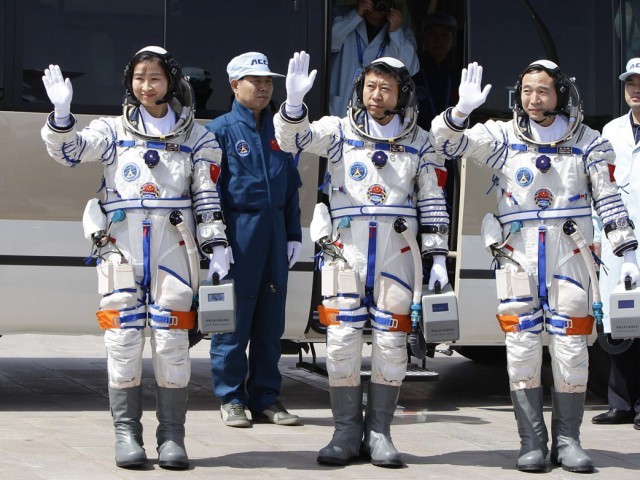 JIUQUAN, CHINA: China put its first woman into orbit on Saturday, one of three astronauts to attempt a critical space docking in the latest challenge for the country’s ambitious space programme.

A Long March rocket blasted off in the early evening from the remote Jiuquan Satellite Launch Centre in the northwestern Gobi Desert, carrying with it the Shenzhou 9 spacecraft and the three astronauts, including 33-year-old female fighter pilot Liu Yang.

This is China’s fourth manned space mission since 2003 when astronaut Yang Liwei became the country’s first person in orbit, and comes as the United States has curtailed manned launches over budget concerns and changing priorities.

The launch was carried live on state television, and until moments before blast-off, a camera showed the three astronauts in the cabin occasionally waving. A red placard with the Chinese symbol for good fortune hung behind them.

Within days, the astronauts will try to dock with the orbiting Tiangong (Heavenly Palace) 1 module launched last September, part of a 13-day mission crucial to China’s ambition to put a space station in orbit around 2020.

“I believe that we can achieve this goal, because we already have the basic technological capability,” Zhou Jianping, the chief designer of China’s manned space engineering project, told reporters before the launch.

A successful manned docking mission for China would be the latest show of the country’s growing capabilities in space, to match its expanding military and diplomatic clout.

Still, Beijing is playing catch up with the United States and Russia, which, along with other countries, jointly operate the International Space Station some 240 miles above Earth.

Rendezvous and docking techniques such as those which China is only testing now were mastered by the United States and the former Soviet Union decades ago, and the 10.5 meter-long Tiangong 1 is a trial module, not a full-fledged space station.

Linking with the unmanned module will be an important hurdle in China’s efforts to acquire the technological and logistical skills needed to run a full space lab that can house astronauts for long stretches.

Fears of a space arms race with the United States and other powers mounted after China blew up one of its own weather satellites with a ground-based missile in January 2007, though China has insisted its programme is peaceful.

“China’s manned space programme has never been for military purposes. It is mainly to research how mankind can go into space, use space peacefully,” He Yu, the general commander of China’s manned spacecraft project, said before the launch.

The United States will not test a new rocket to take people into space until 2017, and Russia has said manned missions are no longer a priority.

But NASA has begun investing in US firms to provide commercial spaceflight services and is spending about $3 billion a year on a new rocket and capsule to send astronauts to the moon, asteroids and eventually to Mars.

Chinese scientists have talked of the possibility of sending a man to the moon after 2020, the final step in a three-stage moon plan, which includes the deployment of a moon rover in 2013 and the retrieval of lunar soil and stone samples around 2017.

China’s space programme has come a long way since late leader Mao Zedong, founder of Communist China in 1949, lamented that the country could not even launch a potato into space.