Wine shops on the horns of dilemma

Wine shops on the horns of dilemma 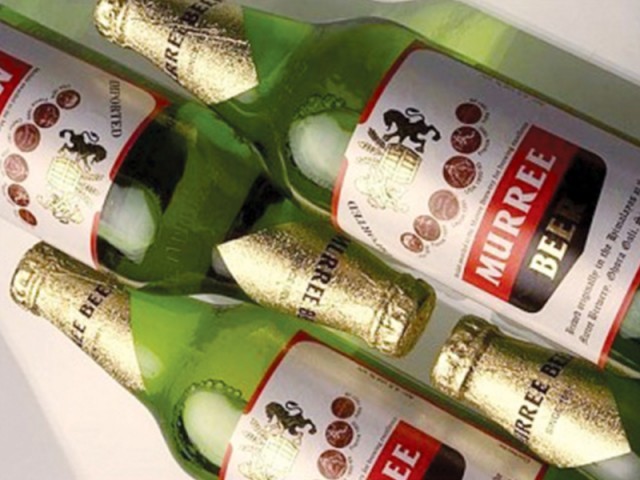 Murree Brewery remains the favourite among buyers as it holds the largest market share of over 70 per cent, say dealers. Beer is its primary product, though it also sells vodka, whiskey and gin. PHOTO: FILE

From the small window of a shop in a dingy neighbourhood of the city, a salesman can’t keep up with the rush of customers clamouring for his attention.

It’s a week day and the commodity on sale is liquor. Men hurry in and out of the shop, slipping in money across a cage-like counter and slipping out with their purchases wrapped in brown paper bags.

But inside the dimly-lit store, the shop owner is counting the weeks it will take him to sell his stock. Around him, crate upon crate of unsold alcoholic beverages is piled up against a 10-foot high wall. The problem is simple: One brand that is popular sells like hot cakes, another, which is not that popular, remains unsold. Shop owners say that they are being pressurised to sell the brand that no one wants to buy. That too by the government.

“No one is ready to buy these products,” says the store owner, pointing at the beer and vodka manufactured by a local company. “But we still have to stock it because that’s the only way we could keep this business going.”

Wine shops in Sindh are being forced to stock products of Indus Distillery and Brewery Limited, a company owned by a senator of the ruling Pakistan Peoples Party (PPP), Hari Ram Kishorilal.

In a bizarre twist, the Sindh Excise and Taxation department, which oversees liquor sales in the province, has made it mandatory for all wholesalers and retailers to purchase “at least 20 per cent of alcoholic beverages from Indus Distillery.” This rule has been in place since 2009.

Authorised dealers are allowed to sell brands of only three local breweries – Indus, Murree and Quetta distilleries. Every time a dealer buys liquor from one these companies, he is issued a transport permit by the excise department.

The permit states “for any quantity purchased from Murree or Quetta distilleries, 20 per cent will have to be bought from Indus.”

“This is frustrating for us as customers don’t like Indus,” said another retailer who also wanted to remain anonymous. “We are basically being used as sales agents for a company whose products don’t sell.”

In the market, Murree Brewery remains the favourite. It holds the largest market share of over 70 per cent, say dealers.

This has not stopped the government from turning the screws on dealers to make them sell the ‘officially sanctioned’ brand.

There is so much fear of the licences being revoked that none of the liquor dealers were willing to speak on record. “Excise officials also express their helplessness. They talk of pressure from the highest office,” alleged one dealer.

Indus Distillery, formerly Beach Brewery, was bought by Hari Ram and another individual Kiran Kumar, in 2009, according to records of the Securities and Exchange Commission of Pakistan (SECP).

Beach Brewery was set up by Byram Avari, the owner of Avari Hotels, in the 1990s. When contacted for details, Avari refused to comment. However, a person close to the company said that the distillery was sold at a discount as the sponsors were continuously harassed.

When asked to explain, Excise and Taxation Director Shabir Ahmed Shaikh said that he “sees nothing wrong in asking dealers to stock certain percentage of Indus’s products.”

He added: “The company is located in Sindh and it contributes to the taxes. What’s wrong in giving it a little preference?” However, he failed to disclose how much the provincial kitty was benefitting from this privilege.

Curiously, Hari Ram, who has been mentioned as the CEO in the SECP document, insists that he has nothing to do with the company.

“My name was just used for the transaction. I have not invested in the company. It is someone else,” he said. He had promised to share details but did not respond to subsequent phone calls.

This curious state of affairs gives rise to many questions about who is behind this company, and why is the official machinery falling head over heels to oblige it, say observers.