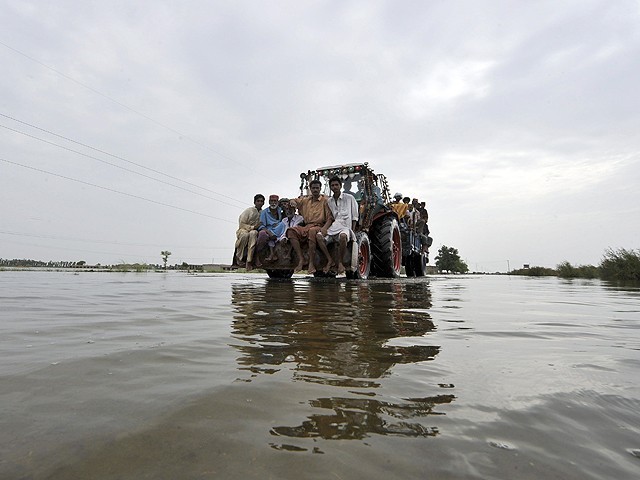 Flood survivors sit on a tractor trolley as they navigate through floodwaters in Karampur. PHOTO: AFP

KARAMPUR: Armed bandits are stealing cattle and food from survivors fleeing the country’s worst humanitarian crisis, exacerbating the misery of the people, witnesses said on Friday.

Outside Sukkur, local residents waded through stagnant flood waters up to their chest, retrieving valuables and lashing out at the government for failing to protect them from looters.

Some villagers said they preferred to guard their flooded homes while sending their wives and children to safety. Others said they had been looted while trying to flee during chaotic scenes.

“There was nobody to rescue us from the floods and now there’s nobody to save us from bandits. We were waiting for help when armed men came and seized our belongings at gunpoint,” said 20-year-old Abdul Karim. “There was not much. Two goats, some wheat and rice. They snatched it all and escaped.”

Sixty-year-old Mai Meema, a mother of five and a resident of Khanpur, said, “We left with our belongings in a tractor when armed men surrounded us. They snatched everything and fled,” she said.

“We are poor people but we never slept on an empty stomach. This flood has made us beggars. We have nothing at all,” said Meema. “They deserve God’s curse. Instead of helping us, these criminals looted us.”

To add to the problems, lack of clean drinking water and sanitation are spreading gastroenteritis and skin diseases, particularly among children, doctors say. “This is a crisis bigger than the tsunami and the Haiti earthquake combined,” said Irshad Shaikh, a regional adviser on emergencies to the World Health Organisation. “The global community has to understand that. It is huge, it is unprecedented.”

“Here they have lost every coping aspect they have — houses, crops, livestock. There is absolutely no coping structure in the communities,” he explained. “This disaster is going to scale back Pakistan for years.”

Warm blankets in the scorching heat

The kind of donations arriving at relief camps in Sukkur are forcing people to recall the October 2005 earthquake relief efforts when old t-shirts and heels were donated to people who had no food and heating equipment in the mountainous, freezing area.

Now, mirroring what happened five years ago, relief camps are receiving warm blankets and quilts for the survivors — the temperature in Sukkur and Khairpur ranges from 42 to 48 degrees centigrade.

“Instead of providing relief, they’re adding to the problems,” said Haji Abdul Rehman, who has set up a private relief camp in Khairpur. Some of the ‘relief’ goods include old and worn out shoes and clothes. “What we need is cash, medicines and dry foods that no one seems to be donating.”

People got into arguments with relief camp authorities when they forced in their buffaloes, goats and cows into the camps. Their plea was justified as their cattle are their wealth but authorities could not take the livestock in because there was possibly no room.

People were forced to improvise and so they set up tents or made makeshift tents out of bed sheets and stayed there with their cattle.