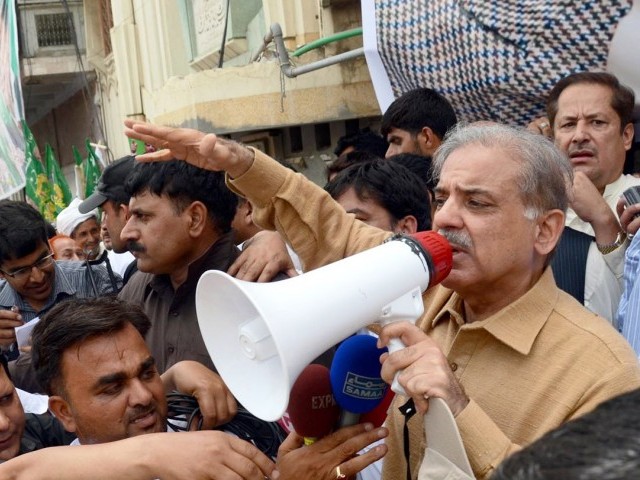 " If a flyover can be built in four months, load shedding can be finished in six months," Chief Minister Shahbaz Sharif. PHOTO: INP

Chief Minister Shahbaz Sharif announced a Rs1.5 billion programme for internships to 50,000 students as well as a 15 per cent quota for women in government jobs as he launched the first Punjab Youth Policy here on Wednesday.

Addressing an audience of several thousand at the Alhamra Cultural Complex, the chief minister described nine features of the policy. Apart from the internship programme, which will also see students working at Chief Minister’s Secretariat and the 15 per cent quota for women, Sharif also announced a five per cent quota for youths in local government jobs and an allocation of Rs2 billion the Women’s Employment Fund.

He said that Rs2 billion would be allocated for the Sports Fund this year, while youths working at farms would be provided tractors. He said the Rs4 billion Youth Skill Development programme inaugurated in southern Punjab last year in collaboration with the British government would now be expanded to the entire province.

If the government had not spent that money on students, then “Ali Baba and his Forty Thieves” would have stolen the money, he said, referring to the federal government. He rubbished the notion that the government had handed out the laptops to win votes. He said the laptops had been distributed on merit and would give the young people who earned them the tools to move the country forward.

“Pakistan is not limited to Punjab,” he said. “It is about all the provinces and all the people.” He said if in the coming elections the people voted his party into government, they would ensure that there was no more load-shedding within six months of coming to power. “If a flyover can be built in four months, load shedding can be finished in six months,” he said.

PML-N member Marvi Memon said it was up to the youth of Pakistan to fix the country. She said she dreamt of a Pakistan free of discrimination and which owned its cultural roots and Islamic heritage.

Punjab Assembly Deputy Speaker Rana Mashhood said the launch was a historic moment and that Punjab was the first province to have a youth policy. Sabiha Shaheen, the executive director of Bargad, an NGO which helped design the policy, said that more than 45 consultations had been conducted in the previous year on initiatives to help young people.

The launch ceremony, which started about 40 minutes behind schedule, was quite crowded, with the Cultural Complex filled beyond its seating capacity of 5,000. More than 500 volunteers helped with crowd control. Many young people chanted slogans (like ‘Go Zardari, Go’ and ‘Shame! Shame!’) and made paper planes out of the Youth Policy flyers distributed at the entrance. A few scuffles were reported in the athletes section.

The ceremony also featured a concert and speeches from at least 10 “youth icons”, including Lahore District Coordination Officer Noorul Amin Mengal, PTV host Taranjeet Singh and Punjab IT Board Chairman Dr Omer Saif. More than 40 stalls had been set up to inform young people about various job opportunities.

Students from LUMS, UET, PU, KEMC and LCWU were present in large numbers at the launch ceremony.