Over the last 10 years, India has not played a partic­ularly active role in Afghan­istan, says US offici­al.
By AFP
Published: June 5, 2012
Tweet Email 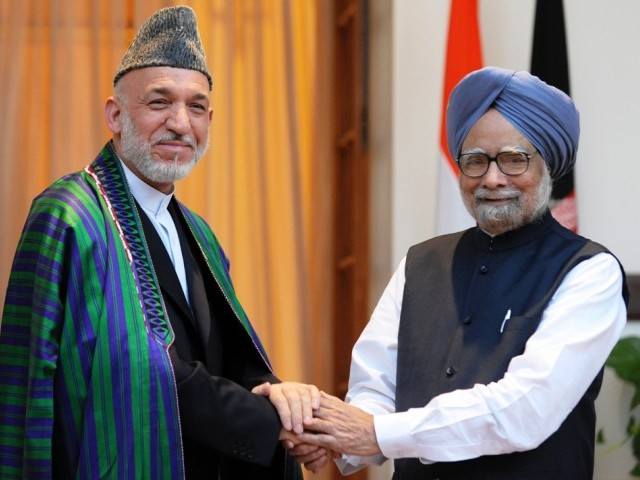 Over the last 10 years, India has not played a particularly active role in Afghanistan, says US official. PHOTO: AFP/FILE

NEW DELHI: US Defense Secretary Leon Panetta will encourage India to play a “more active role” in Afghanistan during a visit to New Delhi, US officials said Tuesday.

Washington has previously worried about India antagonising its arch-foe Pakistan and preferred New Delhi retain a modest profile in the Afghan conflict restricted to troop training and infrastructure development.

But officials briefing reporters before Panetta landed in New Delhi Tuesday said US policy has evolved as the Nato-led force prepares to withdraw combat troops by the end of 2014.

“Over the last 10 years, for a variety of reasons, India has not played a particularly active role in Afghanistan,” a senior defence official, who spoke on condition of anonymity, told reporters aboard Panetta’s plane.

Panetta was due to discuss the issue, as well as a new US strategic tilt towards Asia, when he meets Prime Minister Manmohan Singh and National Security Adviser Shiv Shankar Menon on Tuesday afternoon, before giving a policy speech on Wednesday, officials said.

India has “trained army and police before but on a relatively small scale”, the official said. “We welcome India playing a more active role.”

New Delhi, fearful of the return of an Islamist regime in Kabul, has ploughed about $2.0 billion of aid into the country to gain influence, but is extremely wary of over-stepping.

The US official acknowledged the hostility and distrust between India and Pakistan, but said both countries had a common interest in seeing peace take root in Afghanistan.

“Of course there is a risk that the tensions and historical mistrust between India and Pakistan could lead them to view their respective roles in Afghanistan as being in conflict,” he said.

“This is not predestined. This does not have to be the case.”

Shashank Joshi, an expert on South Asia security and an associate fellow at the London-based think-tank Royal United Services Institute, said the Indians are afraid of what will happen once Nato combat troops pull of Afghanistan in 2014.

“They are convinced the Afghan state is more brittle than the Americans and the British think and fear they will end up picking up the pieces with the jihadis heading east and their interests in danger,” he told AFP.

India’s ambassador to Washington last week called for greater coordination with the United States on Afghanistan in a sign of New Delhi’s unease about the future.

The suggestion India bolster its presence in Afghanistan might be an attempt by Washington to press Pakistan to open its border to Nato supply convoys, which Islamabad has blocked since a US air strike in November that killed 24 Pakistani soldiers.

The United States has been pushing Pakistan to reopen the vital supply routes and has had to rely on a more costly, cumbersome route to the north through Central Asia.

Any enhanced role for India would alarm Islamabad, which views New Delhi’s activities in Afghanistan with deep suspicion, fearing India could effectively encircle Pakistan through its proxies.

The US official said Washington expected regional countries, including India and Pakistan, to step up their role in Afghanistan as Nato withdraws over the next two years.

Apart from the war in Afghanistan, Panetta’s talks with Indian leaders are expected to touch on America’s much-publicised “rebalance” towards Asia, expanding defence ties with India, officials said.

In President Barack Obama’s new strategy blueprint unveiled in January, India is the only country mentioned by name as a vital partner.

US officials say the two countries share democratic traditions and similar concerns about China’s stance as well as the threat posed by Islamic extremists in South Asia.

But both countries have been disappointed about a lack of progress on defence trade and other fronts.