NATO supply routes: Pakistan, US to push for a deal this week

NATO supply routes: Pakistan, US to push for a deal this week 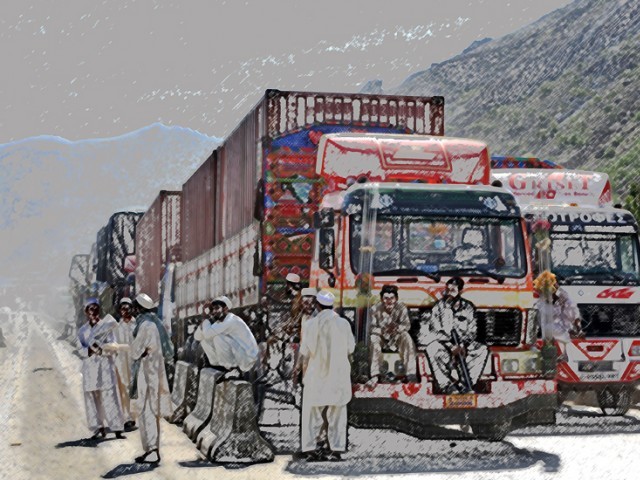 Reopening of Nato supply route is very much a possibility in the upcoming days. PHOTO: AFP/ FILE

ISLAMABAD: Pakistan and the United States will be pushing for a much-talked about agreement this week on the reopening of vital supply routes for US-led foreign forces fighting a Taliban insurgency in Afghanistan.

Currently, talks are deadlocked over taxes and additional transit fee Islamabad is demanding for each truckload of Nato supplies crossing its border into Afghanistan. Washington, however, thinks Pakistan’s demand is not pragmatic and that it will not be ‘price gouged’.

In a latest effort to break the impasse, a senior US official is travelling to Islamabad this week for negotiations with Pakistani authorities, according to a Foreign Office official. US Assistant Defence Secretary Peter Levoy will lead an American delegation at talks with Pakistani officials.

The US deputy ambassador in Islamabad, Richard Hoagland, has been heading the American side at discussions with Pakistani officials for the past several weeks on the reopening of Nato supply routes.

Being a senior official from Washington, Levoy would have the mandate to take a decision on the contentious issue of taxation.

Assistant Defence Secretary Levoy, who looks after Asia and Pacific Security Affairs at the Pentagon, had also spoken to Pakistani officials on this matter in Islamabad back in April – obviously with no success.

But officials from both sides are expecting a ‘tangible progress’ in the upcoming talks to put their troubled partnership back on track.

The two sides are believed to be working on proposals to strike the middle ground on the additional transit fee.

Islamabad seeks to charge $5000 for each Nato container but Washington considers the amount too high.

Sources said that Levoy was also expected to raise with his Pakistani counterparts the contentious issue of Dr Shakil Afridi, the doctor who is believed to have helped CIA hunt down slain al Qaeda chief Osama bin Laden last year.

Dr Afridi was sentenced to 33 years in jail by a deputy administrator of Khyber Agency using his special judicial powers that he enjoys under the Frontier Crimes Regulations – the British-era draconian laws.

Officials of President Barack Obama’s administration and US Congressmen have criticised Dr Afridi’s sentence and called upon Islamabad to release the doctor forthwith.

The forgotten victims of the Kargil war