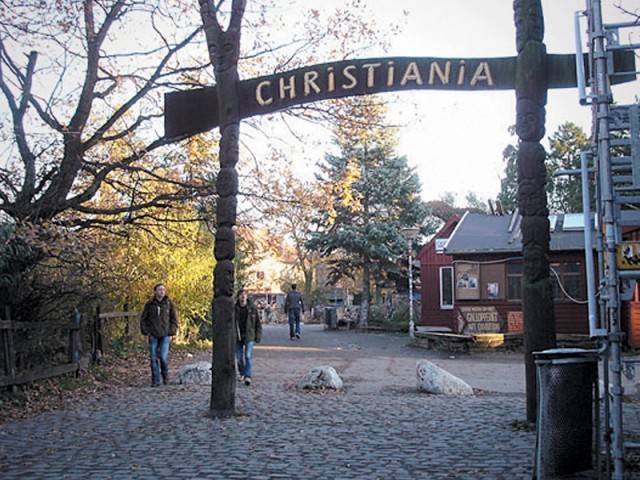 A visit to the ‘Gateway of Scandinavia’ takes the author to Christiania — the anarchist tribal area that the Danes would rather you didn’t know about.

A visit to the ‘Gateway of Scandinavia’ takes the author to Christiania — the anarchist tribal area that the Danes would rather you didn’t know about.

Denmark — a land of fantasy right from the fairy tales of Hans Christian Andersen, who lived on one of the 500-odd islands of this small, idyllic and serene state — is known as the ‘Gateway to Scandinavia’. In winter, however, it’s a dark, cold and foggy country, virtually unliveable for people from a temperate climate, like us Pakistanis.

I was unlucky enough to visit Denmark in November (the best time to travel to Scandinavia is between April and June) but luckily I wasn’t alone and had a good amount of company in my misery in the shape of a dozen senior Pakistani editors who shared this experience with me. Though we were wined, dined and feted lavishly, our week-long stay in Denmark was lifeless, cheerless and sombre as freezing winds kept us indoors most of the time.

Though we also spent a day and a night in Aarhus, the second major city of Denmark, we mostly remained in the capital — Copenhagen or Copenhavan, as the Danes pronounce it. Copenhagen is located in Sjælland (pronounced as Zealand), an island bejewelled with ancient castles blending in beautifully with contemporary architectural wonders.

Copenhagen is arguably the most happening city of Scandinavia — full of tourist attractions — both modern as well as historical: The ravishing Little Mermaid, the awe-inspiring Marble Church, the world’s longest pedestrian street Strøget, the majestic royal residence Amalienborg Palace, and the amusement park Tivoli Gardens.

But for me, the most interesting site was Nyhavn. Nyhavn or new harbour is perhaps the most popular hangout in the heart of the capital. The northern sunny side of this canal is lined with canopied cafes, bars and restaurants. I was told that in summer a carnival atmosphere prevails as young and old, women and men alike sunbathe and enjoy frothing glasses of Carlsberg beer. Denmark has one of the most dynamic and exciting beer cultures in Europe.

Like their country, Danes are a beautiful people who are rated as the happiest on earth. They are fond of socialising and partying and have little to complain about. Our trip was, however, strictly scripted and choreographed — sadly offering us little time from our official engagements to socialise with the common Danes.

Whenever I got a chance I did try and speak to Danes — but that was not very often. At the Danish Institute for International Studies (DIIS), I ran into anthropologist and sociologist Stig Toft Madsen, who shared an interesting tidbit with me. “You know, we also have a tribal area in Copenhagen,” Stig told me over tea. “Are you kidding me?” I asked, taken aback by his revelation. He smiled slyly, and pointed towards a shoddy neighbourhood. “The area across that canal is called Christiania,” Stig said. “Hash and Marijuana is sold openly there,” he said. “We call it the tribal area of Copenhagen.”

Stig, who studied sociology at Meerut University in the Indian state of Assam, has also been to Pakistan — especially to the picturesque Northern Areas and lawless Fata — and hence has a fair idea of what our tribal regions are like. He vividly recalled his ventures into Pakistan while I tried to make myself believe what Stig had just told me. Back in my hotel room, I googled Christiania to make sure Stig wasn’t kidding — and lo! he wasn’t.

Christiania, also called the ‘fristaden’ or ‘freetown’, resembles Fata in many ways. It’s a largely autonomous zone in the Christianshavn borough of Copenhagen. You may call it a large commune or a ghetto, but Christiania has a unique status as it has a different set of laws called the Christiania Law of 1989, which transfers parts of the supervisory role from the Copenhagen municipality to the state. Remember, Fata also has a unique status in Pakistan’s Constitution and is regulated by a British-era law called the Frontier Crimes Regulation. However, unlike the patriarchal Pakhtun tribesmen who populate Fata, Christiania is inhabited by a strange mix of squatters, hippies and free-thinkers — mostly with an anarchist mindset.

Built in 1971 by hippies and squatters, Christiania, especially its ‘Pusher’ Street, gained notoriety for its open sale of cannabis, arms and hard drugs — though the last two have since been banned by Christianites. The Freetown has generated controversies since its founding and sporadic attempts by governments to ‘normalise’ what they thought was a ‘crime-ridden haven for drug dealers’ have led to rioting as residents fought to preserve their freedoms.

Clearly, I couldn’t leave the frozen north without seeing this place for myself and the next day I got on a bus which ended up driving past a canal  filled with steamers, speedboats and canoes. The driver of our bus announced that the neighbourhood across the canal was Christiania, and I knew I had arrived at my destination. It’s a strange, colourful and interesting neighbourhood — perhaps one of Europe’s most famous communes — where derelict military barracks and shrubby, shoddy shacks of squatters jostle with cutting-edge eco-restaurants, galleries and music clubs. Its walls, covered with some very artistic (and some may say subversive) graffiti, speak for the anarchist mindset of its inhabitants. It’s a city within the city, a jointly-controlled village caught up in a time warp with a feel of the freewheeling ‘60s and ‘70s to it. Notwithstanding the controversy surrounding it, Christiania is one of the most popular tourist attractions in Copenhagen.

Not far at all from the madding crowd, Christiania is an ‘oasis of peace and freedom’ for its neo-socialist residents, mostly artists, singers and musicians who hate consumerism and materialism. I wanted to take pictures — but to my surprise I was told that local laws don’t allow this and I had to console myself with taking mental snapshots. Others have been bolder or more well-connected than I and the pictures you see in this article are largely ‘lifted’ from the internet.

Interestingly, on an official sight-seeing trip towards the fag-end of our visit, we were taken to almost all landmarks of Copenhagen, but not to Christiania. Perhaps our hosts — the Danish government — wanted us to see only the modern face of Danish society. Or perhaps they simply forgot about the freetown. Once I was back home I complained to the Danish ambassador about the omission during an informal debrief. “I hope in our next trip to Denmark, Christiania will not be skipped,” I quipped. “Sure,” he replied tersely, while shaking my hand.