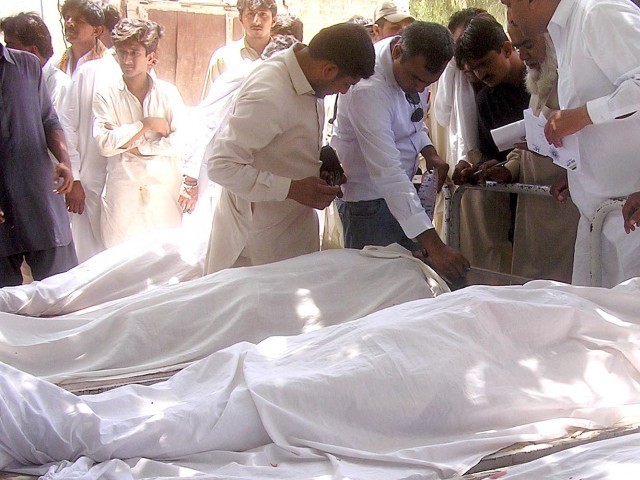 The Swabi-bound bus was carrying 38 passengers. The seven bodies were sent home for burials in Attock, Mianwali, Gujjar Khan and Taxila. PHOTO: PPI

KARACHI: Dozens of supporters of various nationalist parties were rounded up from cities and villages across the province for their alleged involvement in the bus attack near Qazi Ahmed on May 25.

The police denied these reports. “We are not arresting any party workers, but are just hunting for the real culprits,” said Qazi Ahmed SHO Eidan Siyal. Several activities belonging to nationalist parties left their homes and friends and family because of fear of further raids. Confusion reigned, as even leaders of these parties were not sure how many of their activists were apprehended.

“I think 105 of our activists have been arrested. The crackdown started on May 26 but I am not sure if they were arrested for their involvement in the bus attack incident,” said JSQM’s Sagar Hanif Burdai. He added that law enforcement agencies had crossed all limits. “They conduct raids and misbehave with women. This is state terrorism and we condemn it.”

Nearly 20 activists were arrested from Sukkur on Sunday, but sources said that they were all released after being questioned. Javed Memon was reportedly detained from Golarchi, Zameer Panhwar from Khurwah, Manzoor Arisar from Badin and Nawaz Laghari from Matli. However, police did not confirm the arrests.