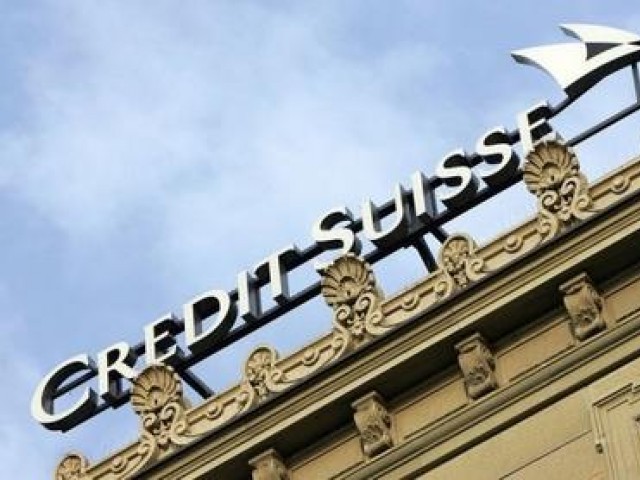 Besides liquidity, Credit Suisse believes there are several other reasons why Pakistan is a highly attractive market. PHOTO: AFP

Swiss banking giant Credit Suisse appears to be optimistic about the prospect of rising equity prices on the Karachi Stock Exchange and is advising its global clientele to consider investing in Pakistan.

In a detailed report issued to clients on Monday, analysts at Credit Suisse said that they believed that the new rules on capital gains tax and the exemption from documenting source of income for the next two years will improve liquidity and trading volumes in the market and allow stock prices to rise to their historical levels of valuations from their currently highly depressed levels.

“Liquidity in 2012 has been concentrated in stocks offering positive earnings surprises (e.g., United Bank, Lucky Cement, DG Khan Cement and Bank Alfalah), enabling them to be strong outperformers,” said Farrukh Khan, a research analyst based in Credit Suisse’ Asia Pacific headquarters in Singapore, in his report. “With further improvements in liquidity, we expect a broad-based price discovery to take hold in attractively valued oil and fertiliser stocks as well.”

Besides liquidity, however, Credit Suisse believes there are several other reasons why Pakistan is a highly attractive market.

It notes, for instance, that Pakistan’s sovereign risk is declining. Yields on Pakistan’s Eurobond have fallen 3% over the past 90 days, which Credit Suisse believes is justified. “A few months back, it seemed imminent that the current government’s altercation with the army would lead to early elections. The crisis has been averted, and for the first time in Pakistan’s history, a democratically elected government looks likely to complete its term in office” Khan stated.

In addition, Khan points out that Pakistani stocks are undervalued by their own historical valuation levels. The seven-year average for the 12-month forward price-to-earnings (PE) ratio (a key valuation metric) is 9.0, but the MSCI Pakistan index is currently trading at an average forward PE ratio of 6.3, which Khan argues is too low.

“Although Pakistan’s macros and politics remain challenging, there is an increasing realisation that this comes with the territory, and should not deter strong bottom-up investing. A large part of the weak politics and macros is built into historical valuations as well,” said Khan.

Credit Suisse also points out that corporate profitability in Pakistan is back to the 2007 pre-crisis levels. The average return on equity for the stocks in the MSCI Pakistan index is expected to hit 30% this year. Earnings yield averages 16% and dividend yields a healthy 7.3%.

The final advantage for international investors, Credit Suisse says, is that Pakistan is highly uncorrelated with the broader global equity markets, especially Europe. This lack of correlation holds both on the upside as well as the downside, meaning investors who are looking to diversify out of their exposure to the weakening European economy should be investing in Pakistan.

The report was issued as part of the run-up to Credit Suisse’s 16th Asia Investment Conference, to be held in Hong Kong over five days in March 2013. In the 2011 conference, Water and Power Minister Naveed Qamar, who then also held the portfolio of privatisation minister, had been invited to speak at a session titled “Pakistan: Long-term growth perspectives”.

It is nonetheless ironic that Credit Suisse is touting Pakistani equities, considering that the Swiss bank tried launching a capital markets business in Pakistan in July 2008 – starting with equity research – and ended up winding up its solitary office in Karachi, moving its staff back to Singapore in early 2010.

Credit Suisse is a Swiss multinational financial services company headquartered in Zurich, with more than 250 branches in Switzerland and operations in more than 50 countries. It has one of the world’s largest private banking and asset management businesses and has a consolidated balance sheet with over $1.3 trillion.