If we know and are proud of who we are, we need not be afraid of becomi­ng someon­e else or Indian domina­nce.
By Amber Darr
Published: May 23, 2012
Tweet Email 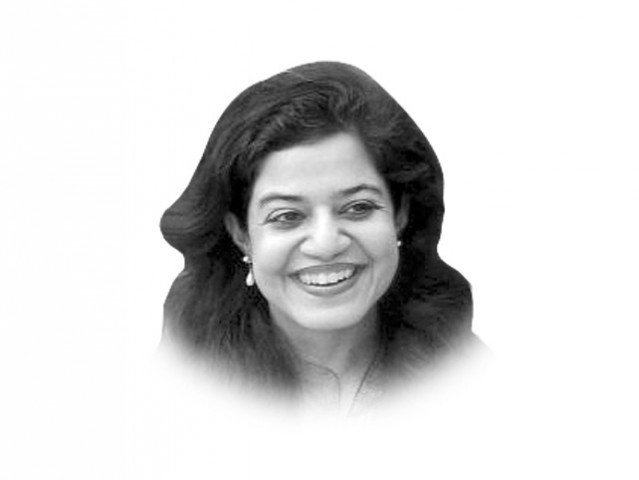 The author is a Lincoln’s Inn barrister practising in Islamabad and holds a degree in Economics and Literature from Bryn Mawr College, US

“Come on, India’s not as bad as all that. Other side of the earth, if you like, but we stick to the same old moon.” — EM Forster, A Passage to India

“What do you think of opening up trade with India?” I was asked casually earlier this week. Even as I collected my thoughts to give a coherent and balanced answer to this evidently loaded question, the conversation moved on to the eternal dilemma of India’s designs against Pakistan’s sovereignty which had to be balanced with Pakistan’s need to peacefully coexist with its neighbours in order to realise its own potential. Even though I was spared the immediate necessity of answering, the question remained in my mind and forced me to consider not only my position on the issue of trade but also my general feelings towards India.

When had I first become aware of India? Had I realised its existence when my first Holy Quran teacher had explained, in response to my precocious questioning, that the word kafir meant Hindu? Or was it when my grandfather shared with us his stories of Partition in a voice hushed with nostalgia and unmistakable pain? Or was it when my mother sang old Indian songs rather than lullabies to help us sleep? The diverse nature of my recollections merely confirmed my suspicion that whatever its origin, my relationship with India was long-standing, intricate and an integral part of my earliest psychological makeup.

I seem to recall being told as a child that India was the ‘other’ that had threatened our existence and our Muslim values and, therefore, it was in our best interest to have parted from it. I failed to understand, however, that if India was indeed so alien, why did I find myself admiring the Taj Mahal, the Red Fort and the Jama Masjid as a 10-year-old child visiting India for the first time, and believing them to be my very own and rightful inheritance? Why did I find so much in common with the Indians I met then and later at college? Why did old Indian melodies and songs speak to my heart above all other music and poetry?

It was at college that I realised that my problem was not with India after all but with the all-encompassing and to me, agenda-driven affection that certain Indians threatened to engulf me with. I resented being told that Partition was a tragedy and a mistake because that sentiment challenged my legitimacy as a Pakistani. However, I also quickly realised that to feel resentment at the expression of such sentiments was a sign of personal weakness and insecurity. If I were confident in myself, if I understood what it meant to be a Pakistani and could define myself completely, without any reference to India, then these words would cease to threaten me.

When I scouted around for a better understanding of what it may mean to be a Pakistani, I was told that our adherence to Islam was our hallmark. The assertion first seemed flawed when I thought of all the countless non-Muslim Pakistanis — Christians, Parsis and Hindus — that I had known throughout my life and later, the Baloch, Pashtuns, Sindhis and Mohajirs, all Muslims, took turns to passionately demand separate homelands on the ground that they were separate nations. Clearly, hiding behind the banner of Islam was not sufficient to hold together the diverse strands of our Pakistani identity.

In my mind, it is imperative for the purpose of healing our national wounds to make peace with our past even if it lies across the border and to allow culture, as well as religion, to commingle into an identity, which is at once unique and authentic to our reality. Does this mean that I support the opening up of trade with India? Yes. Because I feel that trade, rather than political posturing, will allow travel and individual interaction, which in turn will become an important source of healing. And for the sceptics who may still worry about Indian dominance, I have only to say, if we know and are proud of who we are, we need not be afraid of becoming someone else.