Setting the record straight: Not all dictators equal, nor all democrats incompetent

Setting the record straight: Not all dictators equal, nor all democrats incompetent 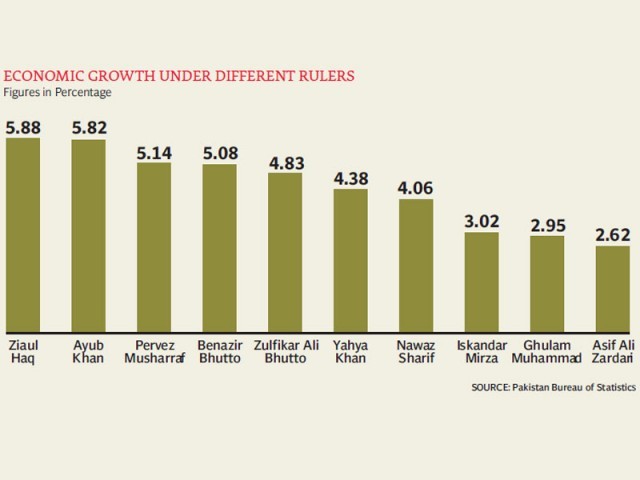 2.62% is the economic growth achieved during President Asif Ali Zardari’s tenure, the lowest for any ruler.

When it comes to economic growth, the old Pakistani cliché that dictators are better than democrats – while broadly true – is too generalised a statement and hides some rather interesting variations.

The Express Tribune took the trouble to go through Pakistan’s historical GDP growth rates and compared various governments. We used GDP growth numbers from the Pakistan Bureau of Statistics records, which go all the way back to fiscal year 1952. We then calculated the geometric average (which calculates the compound average growth rate) rather than the simple arithmetic average to calculate the growth rates during the entire tenure of a government and then we ranked them. The results were somewhat surprising.

For instance, former President Ayub Khan – widely regarded as Pakistan’s best ruler when it comes to economic growth – is actually in second place. The number one spot is held by former President Ziaul Haq, who averaged 5.88% growth during his 11 years in office.

For fans of President Ayub who insist that his record before the 1965 war was better, we checked: it is not true. Pakistan’s growth rate during that period averaged 5.73% per year, which is actually lower than President Ayub’s own overall average of 5.82%. Having said that, industrial growth from the 1958 coup to the 1965 war averaged 9.21%, higher than any Pakistani ruler’s record, including Ayub’s own overall average of 8.51%.

Another surprising insight: if one ranks the ten rulers Pakistan has had since 1952 according to the average economic growth rate during their tenure, both the top five and the bottom five include three dictators and two democrats.

Yes, the top three slots are undoubtedly all taken up by the usual suspects: former Presidents Ziaul Haq, Ayub Khan and Pervez Musharraf, in that order. The next two are somewhat surprising: Benazir Bhutto comes in at fourth place and her father Zulfikar Ali Bhutto is not far behind. The supposedly pro-markets Nawaz Sharif comes in at seventh place.

Yet another surprise: Benazir Bhutto’s average was 5.08%, not far off from Pervez Musharraf’s 5.14%. She beat her rival Nawaz Sharif by a full percentage point: Pakistan’s economic growth averaged 4.06% during Nawaz Sharif’s both terms as prime minister.

Length of time in office appears to matter far more than whether the ruler was a dictator or a democrat. The top three were all in office for at least nine years, with the top two each in office for eleven years. Yahya Khan, Iskandar Mirza and Ghulam Muhammad – none of whom was democratically elected or subject to a popular mandate – all come in close to the bottom of the rankings. None of them had longer than four years in office.

But the more intriguing question to ask is why both the Bhuttos vastly outperform Nawaz Sharif.

The answer lies in the breakup of the GDP number: while Nawaz beat both Bhuttos on industrial growth, he was abysmal when it comes to agriculture. Benazir Bhutto was the best in Pakistani history for agriculture, which grew at an average of 6.65% during her five years in office.

Zulfikar Ali Bhutto, meanwhile, had blowout growth in services, averaging 10.63% during his only term in office, the highest of any Pakistani ruler. (Oddly enough, the elder Bhutto had a poor track record on agriculture, despite his family background. Agriculture grew at a paltry 2.12% per year during his tenure, worse even than Nawaz.)

For those who are currently pessimistic about Pakistan’s economic prospects, you may find some comfort in knowing that the numbers back you up: President Asif Ali Zardari ranks dead last in terms of economic growth, averaging a paltry 2.62% during his term in office so far.