Protests And Rallies: Difa-e-Pakistan Council says no to NATO

Protests And Rallies: Difa-e-Pakistan Council says no to NATO 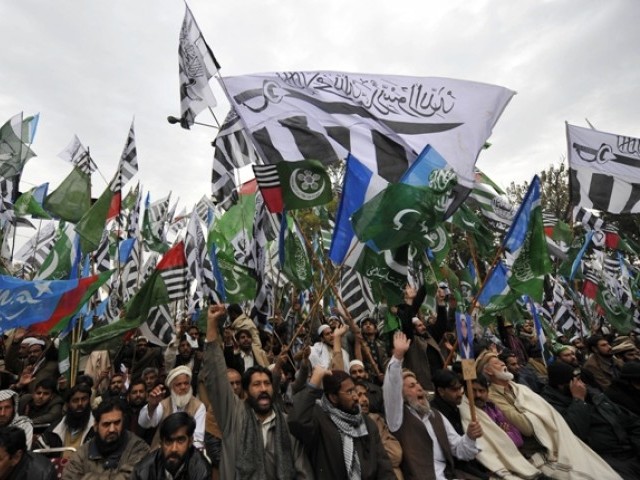 The group announced protest against resumption of routes by organising a long march from Karachi to Islamabad. PHOTO: AFP/FILE

The likely reopening of supply routes for trucks bound for Nato troops in Afghanistan has piqued the Difa-e-Pakistan Council, a coalition of religious-political parties.

The group announced on Saturday that it would be protesting against the resumption of routes by organising a long march from Karachi to Islamabad on May 27. The council also announced that May 25 would be marked as a day of protests.

The key parties that are part of the council include the Jamaat-e-Islami, the Hafiz Saeed-led Jamaatud Dawa, the Ahle Sunnat Wal Jamaat, the group formerly known as the now-banned Sipah-e-Sahaba Pakistan and Samiul Haq’s faction of the Jamiat Ulema-e-Islam. The decision was taken at a meeting at Mansoora Lahore – where the Jamaat-e-Islami is headquartered – and also attended by council leaders Lt Gen (retd) Hamid Gul and Ijazul Haq. The council announced that it has also invited Nawaz Sharif, Imran Khan and Fazlur Rehman to attend the session and develop a strategy on how to ‘defend’ the country, given the sensitivity of the issue.