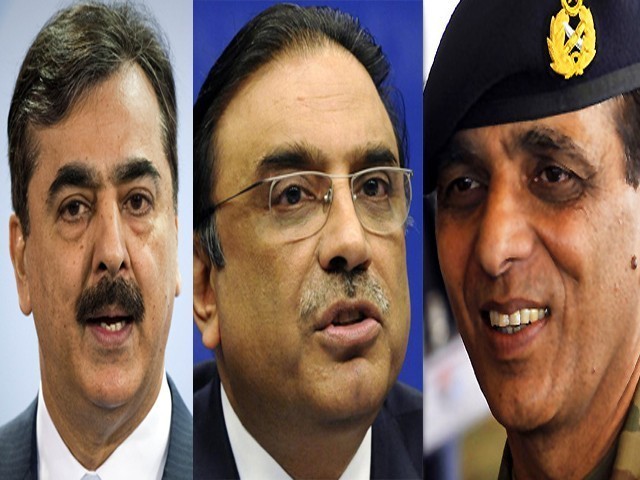 In a move believed to be taken by the military to distance itself from the decision to reopen Nato supply routes for US-led coalition forces in Afghanistan, the army chief will not be in attendance at the key summit in Chicago, where President Zardari is all set to attend, Confirmed PM Gilani.

The resumption of Nato supply routes seems to be well on track.

As the foreign office confirmed President Asif Ali Zardari’s attendance at a key moot on the future of Afghanistan in Chicago on Thursday, Prime Minister Yousaf Raza Gilani ordered officials to finalise an agreement as quickly as possible on lifting a six-month blockade on overland Nato supplies into war-torn Afghanistan.

On the other hand, questions have arisen regarding army chief General Ashfaq Parvez Kayani’s absence in Chicago.

In a move believed to be taken by the military to distance itself from the decision to reopen Nato supply routes for US-led coalition forces in Afghanistan, the army chief will not be in attendance at the key summit in Chicago, sources told The Express Tribune.

Chief of Army Staff Gen Kayani was believed to have been considering being part of the Pakistani delegation, headed by President Asif Zardari, for the historic gathering of over 60 world leaders who are to discuss Afghanistan’s future roadmap.

“General Kayani was considering attending the summit, but he eventually decided against it,” an official familiar with the development told The Express Tribune. However, the official requesting anonymity did not cite any specific reasons behind General Kayani’s decision.

It is believed that his move might be an attempt to dispel the impression that the top military leadership had anything to do with the resumption of Nato supplies.

In an effort to distance itself from the issue, the army has also denied reports that recently held trilateral talks amongst the top military commanders from Pakistan, Afghanistan and the United States had discussed the reopening of Nato supply routes.

When approached, the presidential spokesperson confirmed that Kayani was not travelling to Chicago as he was not part of the entourage.

According to Farhatullah Babar, the President would be accompanied by Foreign Minister Hina Rabbani Khar and Foreign Secretary Jalil Abbas Jilani at the summit.

Negotiations to be finalised soon: PM

“We have directed the concerned ministries and departments to conclude the process as soon as possible,” Prime Minister Yousaf Raza Gilani told reporters on Thursday after attending an event here in Islamabad.

The premier went on to add that the final decision would depend on the outcome of ongoing talks, adding that negotiations over the resumption of Nato supply routes were under way and would be finalised soon.

The prime minister also confirmed that President Asif Ali Zardari would attend the Nato summit in Chicago – a move already endorsed by both the Defence Committee of the Cabinet (DCC) and the federal cabinet.

Pakistani and US officials have been locked in talks to finalise a deal on reopening Nato routes, allowing thousands of trucks and oil tankers to carry non-lethal supplies from Karachi to Afghanistan.

Meanwhile, in a statement, the Foreign Office said that a final decision on reopening the routes will be taken in the best national interest of the country.

“As decided by the Defense Committee of the Cabinet, negotiations on Nato supply, question of apology, fresh border ground rules and cessation of drone attacks are being carried out in a transparent manner,” said the foreign ministry statement.

Meanwhile, at a press briefing White House National Security Advisor Tom Donilon said that there were no plans yet for US President Barack Obama and Pakistani President Asif Zardari to have a separate bilateral meeting; however he clarified that they will meet during the course of the summit in the Afghanistan meetings.

In response to a question, the White House advisor said, “President Zardari was invited to attend the summit and he will do so. He is coming with the Foreign Minister and Foreign Secretary.”

Donilon said that the Pakistani President would attend the meetings being held on Afghanistan on the first day of the summit, adding that there had been “real progress” on the opening of Nato supply routes.

“The key government groups in Islamabad have instructed their negotiators to move to conclude the negotiations.” However, he said that he could not judge at this point when a decision in this matter would be taken.

(With additional input from Huma Imtiaz in Washington)