The Avenge­rs doesn’t fly to the emotio­nal height­s of great superh­ero films but it's funny, and is full of action.
Sunday Magazine Feature
By Noman Ansari
Published: May 21, 2012
Tweet Email 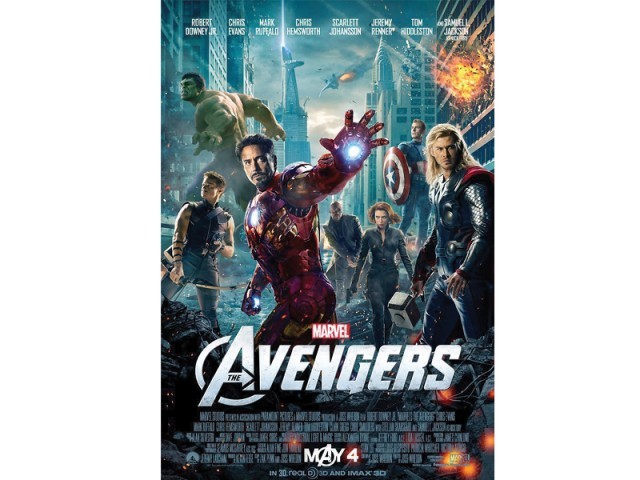 This film is a superhero pizza with absolutely everything on it.

After seven years of meticulous studio development, The Avengers superhero team has finally assembled on the silver screen in a supremely entertaining popcorn flick. Here, director Joss Whedon takes on the superhuman task of making an explosive action film that features no less than six multifaceted characters, most of whom have had back stories developing in Marvel Comics since the 1960s.

The resulting film, considering the many characters involved and the legions of uber-fans to satisfy, is a marvel in terms of functionality.

The film works partially because Marvel Studios cleverly established most of the film’s characters in their individual films. The Avengers continues the story of the power hungry supervillain Loki (Tom Hiddleston) — the adopted son of Norse deity Odin — who has daddy issues of, well, godlike proportions. After being thoroughly hammered by his brother Thor (Chris Hemsworth), a superhero who happens to be the god of thunder, Loki forms an alliance with an evil and belligerent alien race, called the Chitauri. This technologically advanced species agree to invade Earth under Loki’s command in exchange for the Tesseract, an object of nearly unlimited power.

Transported to Earth, Loki attacks a research facility where the Tesseract is being investigated by the espionage agency, S.H.I.E.L.D. The director of the organization, Nick Fury (Samuel L. Jackson), escapes the attack from the scepter wielding supervillain, and sensing his planet is in danger, initiates the ‘Avengers initiative’, to form a team of Earth’s mightiest superheroes.

The team features the above mentioned Thor, who flies using an enchanted hammer and nails his foes with crushing blows. Then there’s the scene-stealing Tony Stark (Robert Downey, Jr), with his genius-level intellect and hi-tech Iron Man suit. The team’s conscience and strategic leadership is provided by Steve Rogers/ Captain America, played by Chris Evans who is a biologically enhanced, shield-slinging supersoldier dating back to World War Two.

The strongest superhero in the group is also the most sympathetic, and that is Dr. Bruce Banner -a scientist with Stephen Hawking level intellect and severe anger management issues. Banner, when unable to control his rage transforms into the towering green Hulk, who is invariably tasked with handling the group’s taller orders. Then there are the very human spec op spies,  Natasha Romanoff / Black Widow (Scarlett Johansson), and Clint Barton / Hawkeye (Jeremy Renner), who add precision to the group’s firepower, and have a highly absorbing chemistry on screen.

Unfortunately, while the chemistry between Black Widow and Hawkeye in the film feels genuine, the friction between some of the other superheroes comes across as slightly forced.  For example, comic book aficionados will know that Captain America and Iron Man tend to butt heads in the comic books, even finding themselves leading opposite sides in the Civil War series, but in The Avengers, their animosity comes across as just a touch pre-functional, if still entertaining.

Having said that, the sequences where our superheroes are gelling are still the most absorbing of the film, and too quickly the film transitions from a study of these contrasting personalities, to ‘Michael Bay’ mode.  Hulk, who ‘smashingly’ steals his every scene — including a hilariously violent one involving Loki — is initially an uncontrollable threat to friend or foe, yet when the real action begins he mysteriously falls in line fairly readily.

While The Avengers doesn’t fly to the emotional heights of great superhero films like Richard Donner’s Superman, Christopher Nolan’s Batman films, or even Jon Favreau’s Iron Man, it can be wickedly funny, and is full of action set pieces sure to initiate multiple nerdgasms. This film is a superhero pizza with absolutely everything on it; it may not be perfect, but it sure is tasty. Oh, and one last thing: Best. Hulk. Ever.

Published in The Express Tribune, Sunday Magazine, May 20th, 2012.