On his death annive­rsary, we revisi­t a tribut­e to the contro­versia­l poet from across the border­
Sunday Magazine Feature
By Raksha Kumar
Published: May 13, 2012
Tweet Email 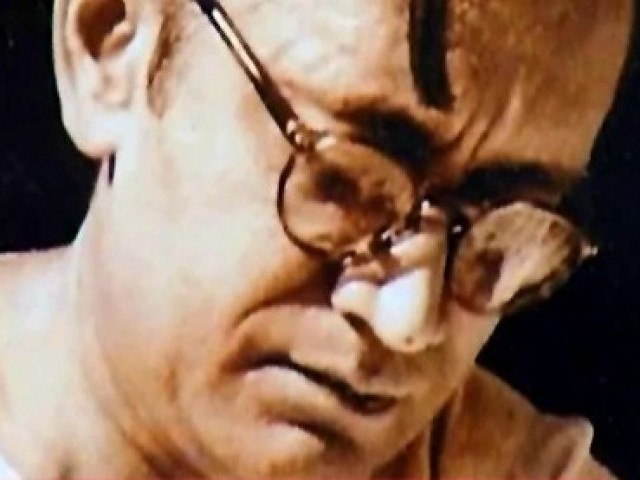 A tribute to Saadat Hasan Manto from across the border. PHOTO: FILE

The narrow, brown pagdandis slice through the thriving green wheat fields as they stretch up to the orange-hued horizon. A restful wind blows and the wheat crops sway merrily. Somewhere in the distance a leisurely rendition of ‘Heer aakhdi jogiya ve jhooth bolle…’ fills the air with melody. And, hidden in the far corner, sitting on the stone walls of the only well in the village, is a man reading a book. He is lean but wears an ill-fitting white kurta, with thick black spectacles perched on his nose and a strand of hair falling carelessly on his forehead.

This is how Samrala, Punjab, looks in my dreams time and time again. The man I see is Saadat Hasan Manto.

Manto was born in Samrala a hundred years ago in May of 1912, in a society filled with strife and discord. I always thought that the melancholy reflected on the wrinkles of his face, even though he was just 43 years old when he died, showed the scars of societal wounds. To me, Manto was a ‘journalist-writer’, someone who took on the essential task of documenting historic events but in a style that would shake the readers’ conscience and drive the point home.

I was born 40 years after 1947, in the south of India, where Partition was little more than a news story. His short stories told me more about life in British India and the Partition than my history textbooks. His stories talked about the lives of Kalwant Kaur, Esher Singh, Mozail and Sirajuddin — the common folk and how they lead their lives. The sincerity in his stories stood out, and I guess, pricked only those people who were guilty of letting our society decay. “If you find my stories dirty, the society you live in is dirty. With my stories, I only expose the truth,” Manto had once said.

With hindsight, I can perhaps understand why Manto managed to draw everyone’s ire and criticism. As many literary scholars have noted, Manto was a man who was way ahead of his time. For instance, when he craftily writes about sexual intercourse and ejaculation using the metaphor of a game of cards in “Thanda Gosht”, the world he was writing in was not used to discussing or reading taboo issues in such forward terms. However, what saddens me is that even today, I cannot be sure that he wouldn’t be tried in court for obscenity as he was then. Many of these short stories are either from the perspective of a woman or have a woman as the main character. This was close to being blasphemous in a male-dominated society.

Despite his deftness with words and clarity of expression, Manto’s fame doesn’t quite match up to his vast body of excellent work.

I wonder if his political incorrectness played a major role in that. In 1954, just a year before his death, he wrote an open letter to then prime minister of India Jawaharlal Nehru. “I heard one of your speeches on the radio at the time the country was divided,” he wrote. “Everyone admired your English. But when you broke into so-called Urdu, it seemed as though some rabid Hindu Mahasabha member had translated your English speech, which was obviously not to your liking. You were stumbling on every sentence. I cannot imagine how you agreed to read it aloud.”

Manto’s ego as a writer was never hidden. In his Letters to Uncle Sam, where he not only discusses the subcontinent’s condition but skilfully contrasts the situation with the riches of the US, he says, “I used to be all India’s greatest short story writer. Now I am Pakistan’s greatest short story writer.” In fact, the inscription on Manto’s tombstone once used to read: “Here lies buried Saadat Hasan Manto in whose bosom are enshrined all the secrets and art of short story writing. Buried under mounds of earth, even now he is contemplating whether he is a greater short story writer or God.” Manto’s sister thought, perhaps wisely, that others might not share the writer’s humour and had the tombstone replaced.

Such an ego, coupled with a few more years of life for Manto, would have done the Bombay film industry a great service. Even today, when you watch the drowsy version of Shikaar or Mirza Ghalib, the films he wrote, you can see his brilliance in script writing.

In her autobiography Raseedi Ticket (Postal Stamp), Amrita Pritam recalls that her childhood fantasy man was an imaginary Ranjan. I always thought of Manto as my ‘Ranjan’ — a man who was articulate, sensitive, creative and could invade my dreams without my consent.

Manto was right when he said, “Saadat Hasan will die one day, but Manto will live on.”

Published in The Express Tribune, Sunday Magazine, May 13th, 2012.

Book review: Pakistan on the Brink – something borrowed, something blue