Rubbis­hes claims of being backed by intell­igence agenci­es.
By Qaiser Butt
Published: May 6, 2012
Tweet Email 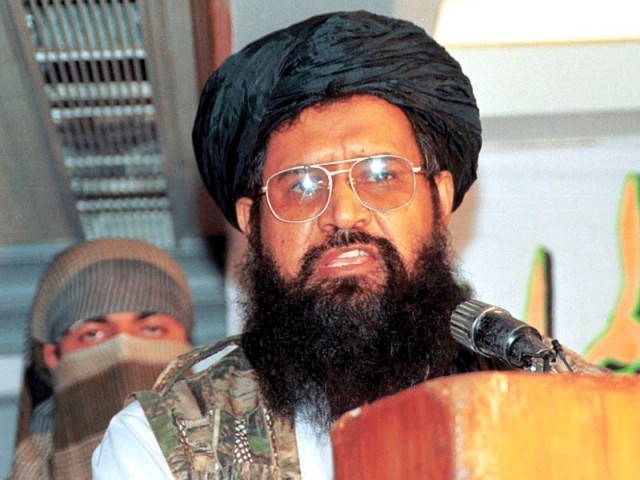 Rubbishes claims of being backed by intelligence agencies.

A founding member of the banned militant outfit Harkat-ul-Mujahideen and one of the top leaders of Difa-e-Pakistan Council, Maulana Fazlur Rehman Khalil fears that the government will restore Nato supplies soon.

Khalil expects Nato supplies to be resumed by the government by the middle of this month and before the summit in Chicago. “We are aware that the government has already taken a decision to this effect. May 17 has been fixed as the final date for the resumption of Nato supplies through Pakistan.”

But the Difa-e-Pakistan Council says it will not stand back while the supplies are restored. Khalil is confident that he can whip up a frenzy over the case.

“We oppose the restoration of Nato supplies as it is obvious that the weapons will be used against Pakistan. DPC will use each and every method to force the government to reverse its decision.”

When asked about the kind of measures he had in mind, Khalil said “we will adopt legal and constitutional means. DPC will organise a long march from every corner of the country towards Islamabad.”

Even though the unanimously passed parliamentary committee’s recommendations state that the route will be used for ‘non-lethal’ goods only, Khalil remains pessimistic.

“What is the logic for piling up arms in the region when Washington has already announced its decision to pull out its troops from Afghanistan in 2014.”

He refuted reports claiming the Difa-e-Pakistan Council to be a product of intelligence agencies to voice anti-US sentiments.

Khalil, who is also the current leader of another group Ansar-ul Ummah, says: “It has become part of the political culture to brand every new organisation as the product of intelligence agencies. Imran Khan’s Tehreek-e-Insaf was also dubbed as their brainchild by political rivals.”

He does not agree with the opinion that militants in Fata who are from other regions besides Pakistan should be asked to surrender their arms.

Criticising Balochistan-based Pashtun nationalist leader Mehmood Khan Achakzai’s comments that foreign nationals should be given permanent residence subject to their willingness to surrender weapons, Khalil said: “It will be an unfair deal, as each and every person in the tribal area is allowed to carry arms.”

He feels it is not the Afghan nationals and Pashtuns from other regions that are causing unrest in tribal areas, but the government’s pro-US policies. “They are being dubbed as terrorists by the US because they are the ones fighting foreign invaders in Afghanistan.”

Khalil says that after targeting the al Qaeda leadership, Washington is now gearing up against Muslim militants in Pakistan – head money on Hafiz Saeed being part of this initiative.