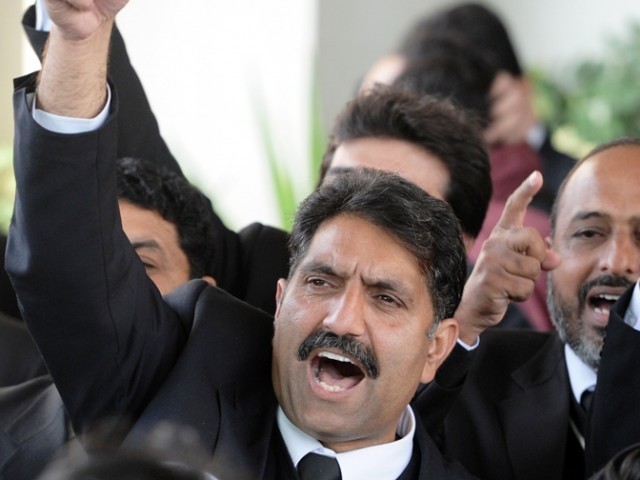 RAWALPINDI: Lawyers of the Pakistan Peoples Party (PPP) created a ruckus during a session of Rawalpindi District Bar Association (RDBA) on Thursday, where a resolution demanding Prime Minister Yousaf Raza Gilani’s resignation was scheduled to be moved, Express News reported.

The altercation started in Quaid-e-Azam Hall of the Rawalpindi District Court after the naat and recitation of the Holy Quran, when the PPP lawyers stood up and started chanting slogans against the resolution.

The session was summoned in the light of the Supreme Court’s verdict in the contempt case against Gilani by the president and secretary of the RDBA.

The lawyers split into two groups, with PPP lawyers on one side and lawyers from Pakistan Muslim League – Nawaz (PML-N) and Pakistan Tehreek-e-Insaf (PTI) on the other. A brawl also started between both groups.

The PPP lawyers demanded that a resolution of this nature was uncalled for and that it was too early to draw conclusions and a detailed judgement was not out yet.

The session was summoned because PML-N and PTI lawyers had demanded that the resolution be moved and that a new prime minister be appointed should replace Gilani.