Lal Masjid operation: Who was responsible for it?

Lal Masjid operation: Who was responsible for it? 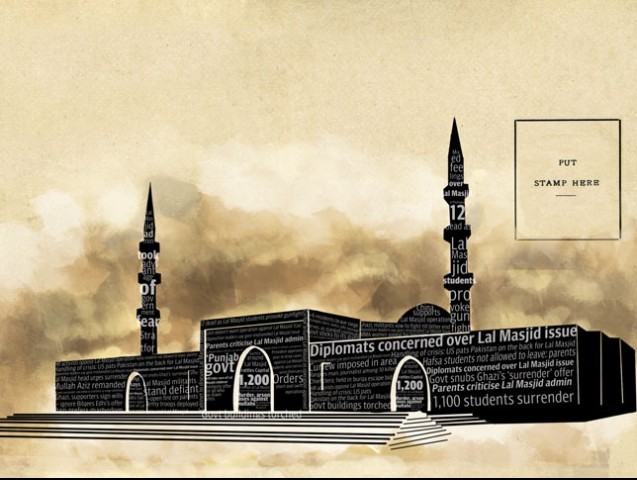 " We want all those responsible for this tragedy to be taken to task, including the agencies, government and especially Maulana Aziz," Aggrieved parents. ILLUSTRATION: ANAM HALEEM

After being allotted a large chunk of land in H-11, there is still confusion over who is going to built Jamia Hafsa. As the discussion over the matter ensued at the Supreme Court (SC) on Wednesday, a group of aggrieved people posed more pressing questions that remain to be answered.

Parents of the children, who went missing or died during the military operation at Lal Masjid in 2007 (adjacent to the original site of Jamia Hafsa), approached the court to determine the people responsible for the tragedy. Almost five years on, they claimed no steps had been taken to find out the reasons behind the incident, and what has happened in the aftermath is also yet to be addressed.

Among many others, Hafiz Muhammad Shoaib died during the Lal Masjid operation, Nazar Hussain’s son Tahir Farooq has been missing since then and Muhammad Ali’s father Muzammil Shah (who even volunteered land to the mosque), has no clue where his son is.

These aggrieved parents asked the bench to call in Maulana Abdul Aziz, the controversial head of Lal Masjid, and the agencies to seek answers.

“This story is not as simple as it seems. Aziz just wants to profit from our losses and grief. We want all those responsible for this tragedy to be taken to task, including the agencies, government and especially Maulana Aziz,” they said.

The parents also questioned why the land in H-11 has been allotted to Aziz in his name, rather than to the madrassa itself.

The court has accepted their arguments and directed them to file an application to be made party to this case. The hearing has been adjourned till May 8.

The SC was hearing the petition filed by Wafaqul Madaris, who have opposed the deal between the Capital Development Authority (CDA) and Maulana Aziz, calling it a “violation of the court orders”. The body maintained that Aziz and the civic authority had finalised the details of the land, construction and other matters on their own.

Justice Tariq Pervez observed that the courts orders cannot be violated or sidestepped using such mutual agreements. Chief Justice (CJ) Iftikhar Muhammad Chaudhry said the parties were bound to strictly abide by the courts orders [to rebuild the Jamia Hafsa at a suitable location].

The attorney for Wafaqul Madaris, Iftikhar Gillani, a senior vice president of the Pakistan Tehreek-i-Insaf, said that the agreement between the CDA, Islamabad Capital Territory administration and Maulana Aziz was taken under coercion, upon which the court expressed its concerns.

“This was not the case,” said Justice Khilji Arif Hussain, as he addressed the ulema of Wafaqul Madaris. “We respect you, but stick to your own decisions. You had accepted the terms and conditions earlier.”

The CJ added, “Why should we listen to you now, when you have unilaterally gone and taken this decision [that did not comply with the SC’s earlier order]?”

The SC order was to compensate the Lal Masjid administration with an equivalent area of land to that which the madrassa legally controlled — about 250 square yards. No progress was made to implement this order.

When we asked the government attorney, he said the CDA is not supposed to carry out construction work, and called it a violation of the court’s orders, upon which contempt notices have already been issued.