Final talks on the projec­t to be held on May 24 in Turkme­nistan.
By Zafar Bhutta
Published: April 21, 2012
Tweet Email 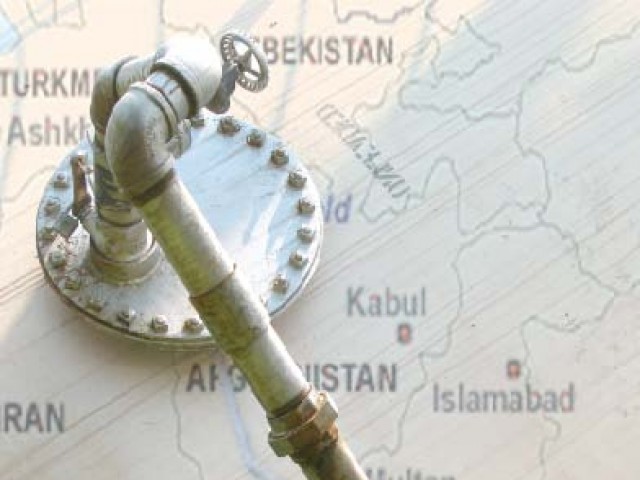 The government on Friday confirmed that Pakistan, India and Afghanistan had agreed on a transit fee rate for the multi-billion-dollar TAPI gas pipeline project, and that a final round of negotiations will be held on May 24 2012 to lock down the deal.

While addressing a press conference, Federal Minister for Petroleum and Natural Gas Dr Asim Hussain announced that the three participating countries had agreed on a transit fee rate of 49.5 cents per Million British Thermal Units (mmbtu), during talks recently held in Islamabad.

“India will pay 49.5 cents per MMBTU as transit fee each to Afghanistan and Pakistan. Pakistan will pay an equal amount to Afghanistan only. India has already signed the gas sales purchase agreement with Turkmenistan, and Afghanistan is to soon sign a gas price deal with the latter,” he said.

“Pakistan will get $217 million as transit fee from India, which will be paid to Afghanistan,” he calrified.

“The steering committee on TAPI will meet on May 24 in Turkmenistan to hold a final round of talks on the gas pipeline project,” Hussain added.

“The country will save one billion dollars annually through the project, over the use of furnace oil,” he said.

He termed the consensus on the transit fee a milestone in the country’s history.

He said that negotiations on gas pricing were underway, but refused to disclose further details at this point. However, he added that gas import under the TAPI project would be cheaper as compared to gas import from Iran under the IP project.

“Iranian gas will cost $13 per mmbtu and Turkmen gas $11 per mmbtu, if the crude oil price is $100 per barrel,” the official said; adding that Pakistan will sign a Gas Sales Purchase Agreement (GSPA) with Turkmenistan in the upcoming May talks.

Dr Hussain said that negotiations over the Iran-Pakistan gas project are also in process, and the government has adopted a clear stance on it. He said work on the designing of the project was under way, and soon contracts for the same would be advertised in national dailies.

The minister maintained that the government was negotiating with the Algerian government to import LNG, and said that ministerial level talks were recently held in this regard. He said that the LNG import project will also be advertised, after approval is given by the Economic Coordination Committee in its next meeting.

Hussain also announced that 100 LPG stations would be set up with assistance from Pakistan state Oil within two to three months to meet growing energy shortages.

He regretted that past governments had not realised the growing energy requirements of the country, which had led to present hardships. He said the government has focused on expediting oil and gas exploration, and hoped that the situation in this sector will improve in three to four years.

Replying to a question on the CNG quota system, Dr Asim said that work was progressing on the CNG Stations Policy, and the government will announce a quota sometime in the next two weeks.

Hussain said that the petroleum ministry had stopped licencing gas supply to 157 new projects due to gas shortages, as the issuance of new licences would aggravate problems. “If new gas connections are given to housing schemes, it will necessitate curtailment of gas supply to all sectors,” he concluded.

Hussain ruled out irregularities in the appointment of the managing director of the Oil and Gas Development Company Limited, and said that three names had been sent to the Prime Minister for approval.

The minister further said that the Oil and Gas Regulatory Authority had
the mandate to direct gas companies to reduce Unaccounted for Gas (UFG). “Gas companies are [now] making efforts to reduce the rate of UFG,” he added.
Published in The Express Tribune, April 21st, 2012.