Indo-Pak disputes: In the chill of Siachen, Kayani warms up to peace

Indo-Pak disputes: In the chill of Siachen, Kayani warms up to peace

Says countr­y should spend less on defenc­e, focus on welfar­e of the people.
By Sumera Khan
Published: April 19, 2012
Tweet Email 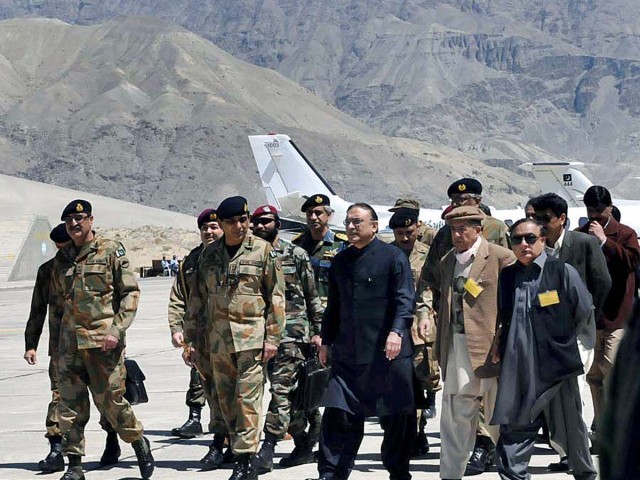 President Asif Ali Zardari arrives at the Skardu airport for his visit to Giari along with Chief of Army Staff General Ashfaq Pervez Kayani. PHOTO: APP

SKARDU / ISLAMABAD: In an unusually candid talk with the media on Wednesday, army chief General Ashfaq Parvez Kayani joined the debate about the human and financial cost of fighting in an uninhabitable area – suggesting that the Pakistan Army was in favour of demilitarising Siachen, dubbed the world’s highest battleground.

He said that Pakistan and India should resolve all outstanding disputes with each other, including Kashmir and Siachen, through dialogue.

Speaking at Skardu airport after visiting the remote Gayari base, where he accompanied President Asif Ali Zardari on day 12 of the search operation in the sector, the general said the high cost and environmental impact were good reasons why the area should not be militarised.

“Peaceful coexistence between the two neighbours is very important so that everybody can concentrate on the well-being of the people,” he told reporters. He hastened to add that Pakistan’s desire for peace “should not be misread as weakness.”

However, asked about Nawaz Sharif’s comment that Pakistan should take the lead in pulling out its troops from the inhabitable climes of Siachen, Gen Kayani said: “I do not want to answer the questions raised by Nawaz Sharif; the world knows why we are sitting in Siachen; Pakistan is not willingly staying in Siachen as we placed our forces in response to India.”

The army chief went on to add that he would like to see the country spend less on defence, adding that even though soldiers would do their duty come what may, defending borders should not be the country’s sole priority.

“We in the army understand very well that there should be a very good balance between defence and development. You cannot be spending on defence alone and forgetting about development,” he said.

“Ultimately, the security of a country is not only that you secure boundaries and borders but it is when people that live in the country feel happy, their needs are being met. Only in that case will a country be truly safe,” Kayani said, adding that national security should be a comprehensive concept.

“And therefore we would like to spend less on defence, definitely,” he said. “Any country should do the same – more focus should be on the welfare of the people.”

Kayani also stressed the urgency of halting the damage to the environment caused by troop deployment on the Siachen Glacier.

“Ultimately it’s going to affect the River Indus adversely and we understand water is important and water management is very important,” he said.

Earlier, President Zardari was accompanied by General Kayani to Giari base, where the supreme commander of the armed forces expressed solidarity with the military personnel and rescue teams searching for the 138 soldiers and civilians buried under an avalanche nearly two weeks ago.

The visit comes a day after Pakistan Muslim League-Nawaz (PML-N) chief Nawaz Sharif travelled to Skardu and conducted an aerial survey of the avalanche site.

The president and army chief were also given an aerial view of the avalanche site where rescue operations are currently in full throttle. Later, the president was given a detailed briefing about the rescue activities underway by Force Command Northern Areas Commander Major-Gen Ikramul Haq.

President Zardari appreciated the efforts that were being made by the army and paid tribute to the buried soldiers.

“The whole nation is indebted to these sons of the soil and prays for them from the very core of their hearts,” the president said, adding that all available resources should be utilised to further expedite the operation.

On April 7, a huge wall of snow crashed into the remote Giari sector base, where the 6th Northern Light Infantry Battalion had been stationed, smothering an area of one square kilometre and burying at least 124 soldiers and 14 civilians. More than 450 rescuers have been working in sub-zero temperatures at the site, which is at an altitude of around 4,000 metres, though experts have said there is little chance of finding any survivors. (WITH INPUT FROM WIRES)