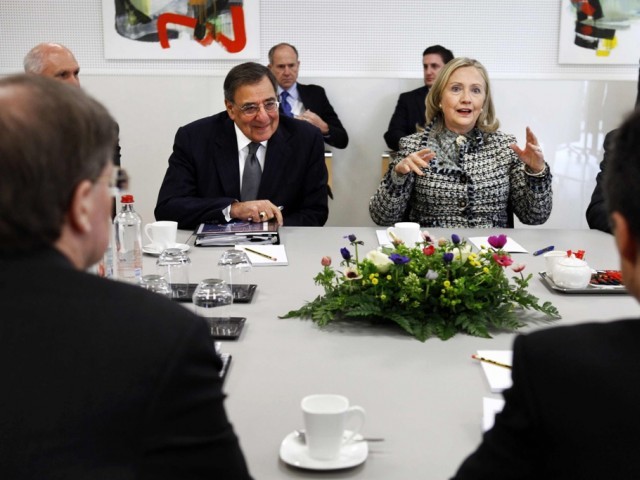 BRUSSELS: Nato allies sought Wednesday to ensure a smooth withdrawal from Afghanistan and reassure Kabul that the West would financially back Afghan forces once foreign combat troops are gone in 2014.

US Secretary of State Hillary Clinton and Defence Secretary Leon Panetta met with their European and Canadian counterparts as the alliance fine-tunes the final phase of a pullout from the increasingly unpopular war.

The talks aimed at preparing a Nato summit in Chicago on May 20-21 follow a weekend Taliban onslaught in Kabul that underscored the insurgency’s resiliency even as officials insist that militants are on the backfoot.

Afghan forces are gradually taking over control of security in the country, with the goal of being in the lead nationwide next year to enable most of the 130,000 foreign troops to leave by the end of 2014.

Nato ministers discussed the future size and funding needed to sustain Afghan security forces after 2014, estimated at $4.1 billion a year.

“We will play our part and pay our share in sustaining Afghan security forces at the right level in the years to come so they can keep their country strong and secure in the future,” said Nato Secretary General Anders Fogh Rasmussen.

Although the figure was endorsed by Afghan authorities and the international community, he said no final decision would be made at the two-day meeting in Brussels and that discussions would continue in Chicago.

“It’s a fair sum but it’s very considerably less than we’re spending at the moment,” he told reporters.

Afghan President Hamid Karzai on Tuesday said he wanted the United States to commit on paper that it would provide “at least $2 billion” a year after US combat troops withdraw.

Nato’s role after 2014 is also under discussion, with Rasmussen saying the alliance would continue to train, assist and advise Afghan security forces but would no longer go into combat.

As the alliance hands over to the Afghans, nations are plotting their withdrawals.

Australian Prime Minister Julia Gillard said Tuesday she would bring home 1,550 troops a year earlier than planned, with most soldiers withdrawn in 2013 after significant security gains over the past 18 months.

Rasmussen insisted that Australia’s announcement was part of the transition plan agreed by Nato and its partners.

“All 50 allies and partners within the Isaf coalition have committed themselves to the basic principle of, ‘in together, out together.’ And I know that the Australians are committed to that principle as well,” Rasmussen said.

But German Defence Minister Thomas de Maiziere said he was “surprised” by Gillard’s announcement as his Australian counterpart had declared “something different” during alliance talks in February.

Another major contributor in Afghanistan, France, may also review its pullout.

France’s right-wing President Nicolas Sarkozy announced earlier this year that French troops would switch from a combat to a support role in 2013.

Socialist candidate Francois Hollande, favourite to defeat Sarkozy in the two-round election taking place on Sunday and May 6, wants to bring troops home by the end of this year.

With the war increasingly unpopular in the United States too, President Barack Obama, facing his own tough election in November, plans to withdraw 23,000 of the 90,000 US troops in Afghanistan this year.

The US military, meanwhile, was hit by a potentially damaging revelation on Wednesday as the Los Angeles Times published two-year-old photos of US soldiers posing with the remains of suspected suicide bombers.

Panetta condemned the conduct depicted in the pictures, vowing that “anyone found responsible for this inhuman conduct will be held accountable in accordance with our military justice system.”

Rasmussen also condemned the photos but stressed that it was an “isolated event.”