Fresh agreem­ent to be signed with US; Defenc­e Commit­tee approv­es roadma­p for US ties.
By Kamran Yousaf
Published: April 18, 2012
Tweet Email 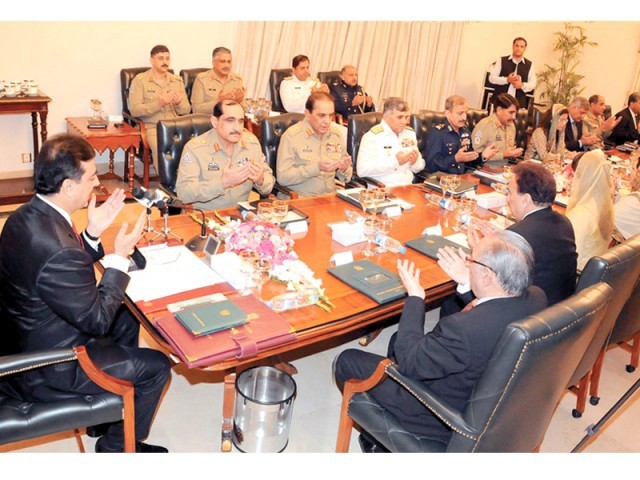 Fresh agreement to be signed with US; Defence Committee approves roadmap for US ties. PHOTO: PPI

The supply routes were blocked in November last year in retaliation for a Nato airstrike on Pakistani border posts in the Mohmand tribal region that killed two dozen soldiers.

The decision to reopen the Nato supply lines was taken by the Defence Committee of the Cabinet (DCC).

The committee also approved a roadmap, paving the way for normalisation of bilateral relations between Pakistan and the United States, an official familiar with the development told The Express Tribune.

Prime Minister Yousaf Raza Gilani presided over the meeting which was attended by key members of his Cabinet, three services chiefs and the head of Inter-Services Intelligence.

The government would now negotiate and sign a fresh agreement with the US under which Nato routes would be reopened, the official said.

Though the government has not given any timeline, the official added that a new Memorandum of Understanding (MoU) would possibly be concluded before a Nato summit in Chicago next month.

Foreign Minister Hina Rabbani Khar is expected to travel to Washington soon to take up all issues, including the Nato routes, with the administration of President Barack Obama in light of the new policy guidelines approved by parliament.

An official statement issued by the Prime Minister House after the meeting also hinted at lifting of the almost five-month-old blockade.

“The US-Pakistan bilateral relationship is an important one and we must be mindful of our national interest and uphold our territorial integrity and national sovereignty,” the statement quoted Prime Minister Gilani as saying.

The meeting decided that a work plan may be developed for effective implementation of the parliamentary guidelines based on Pakistan’s national interests, said another statement issued by the Foreign Office.

The committee reaffirmed that there will be no compromise on Pakistan’s nuclear programme and agreed that the government may pursue the aim of international civilian nuclear cooperation.

It was agreed that the parliamentary review and oversight would not only give public ownership to the country’s foreign and security policies but also help strengthen the hands of the government in dealing with the international community on issues of national importance.

The meeting strongly condemned Sunday’s terrorist attacks in Kabul and other Afghan cities and reaffirmed Pakistan’s support for an Afghan-led and Afghan-owned reconciliation process.

The meeting also offered special prayer for the safety of the Pakistan Army troops and civilians trapped under snow in the Giari sector. It was decided that the Friday, April 20 will be observed as Youm-e-Dua (day of prayers).