The three-day event ends on a low note.
By Our Correspondent
Published: April 17, 2012
Tweet Email 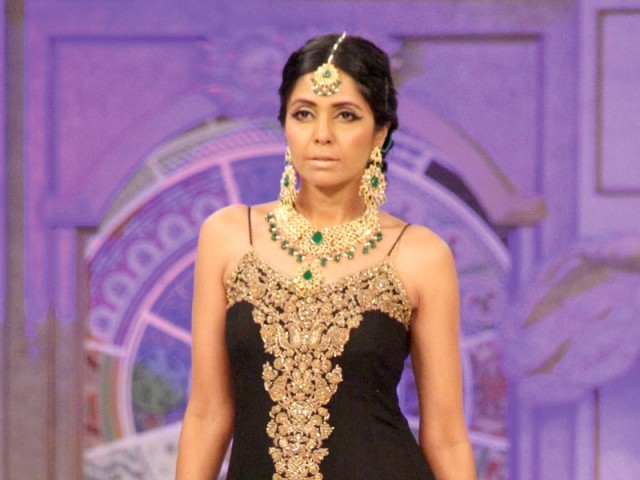 After the first two days of mostly unimpressive displays on the ramp, the third day, which was also the finale of the Pantene Bridal Couture Week 2012, was no different. The collections presented were far from appealing and if anything saved the day, it was performances by Komal Rizvi and Egyptian dancer Hammada and Alamgir.

The duo’s collection consisted of immaculate sherwanis in royal blue and beige, as well as ghararas in turquoise, beige and navy blue. The collection had extensive work on the necklines and the velvet and jamawar borders gave it a regal appeal. Their collection was, without a doubt, the best one of the night.

Although Mughal’s formal line was not much to write back home about, the gharararas, especially the ones in red stood out due to the embellishments and good use of gold wire work. Mughal, who has carved a niche for herself in the fashion world because of her signature flowy shirts, did not quite live up to the expectations this time around.

Faruqi’s collection, with intense embellishments, was a perfect example of poor colour gradations and an unwise colour palette. After the designer wowed the audience with her tribute to bar girls a fortnight ago at Showcase, much was expected from her but she failed to impress this time.

The Cara collection presented by Imran Ikhlaque and Mustafa Shakeel, seriously lacked creativity. Had the designers spent a little more time and effort on the colour scheming, the line may have worked. Additionally, the use of excessive layering gave the outfits a messy look. From poor colour scheming to garish embellishments to the cuts used for the outfits, the collection was a huge disappointment.

‘The Ecstasy collection’, designed by Sheikh Faisal, was inspired by the Mughal, Nizam and Victorian era. However, it was only the Mughal line, mostly in semi-precious stones, that stood out. The designer showcased a vast array of necklaces, earrings, cocktail rings and bracelets in the collection.